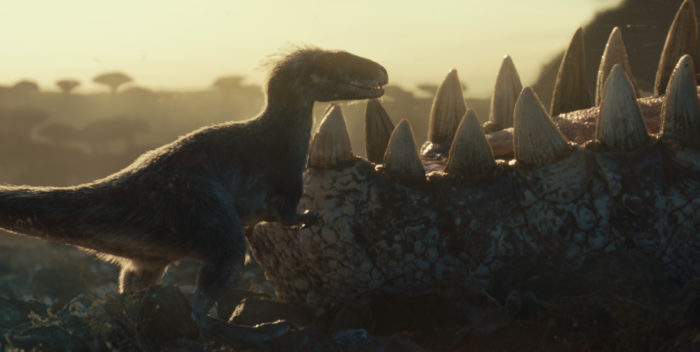 “Jurassic World: Dominion” is the sixth and last of the “Jurassic Park” movies that started in 1993 with a trilogy, took a break and returned in 2015 with a second round of three films.

All the original characters from the ’93 film are back because this is the “Spider Man: No Way Home” of “Jurassic” films. It’s two and a half hours long, has dozens of characters, plots, everything but the kitchen sink. You can imagine director Colin Trevorrow overseeing this project, saying, Yeah, throw that in, too!

The actual park where the dinosaurs used to roam is a thing of the past. Now they are everywhere. You don’t have to go to them, they will come to you. And Trevorrow makes sure there’s nothing subtle: this is one of the loudest movies I’ve ever heard. Kudos to the sound people.

So Chris Pratt and Bryce Dallas Howard, who were so young and crisp in the 2015 first chapter, are living together off the grid with a teenage girl named Charlotte who has a British accent. They are her technical foster parents. Who is she? No one is sure, but she seems to be the granddaughter of Sir Dickie Attenborough‘s character from the ’93 movie. And everyone is after her, the good guys and the bad guys. We’ll find out why down the line.

Anyway, because she’s suddenly rebellious Charlotte takes off, thus attracting the bad guys’ attention. All hell breaks loose, Pratt and Howard must retrieve her, and we are off to the races. Meanwhile, Laura Dern finds her old pal, Sam Neill, and they go to an evil laboratory to discover why there are dinosaurs and flying cockroaches devouring the world’s food supply. Their old buddy, Jeff Goldblum, works for the lab, but he’s a good guy, of course, who doesn’t realize his evil corporation — run with devilish villainy by Campbell Scott— is trying to destroy the world.

Meantime, dinosaurs flying and ground bound are everywhere. Unless provoked, they’re pretty chill but still cause a lot of damage.

Eventually these two different movies will merge and we’ll have all the “Jurassic” principles together, like they had the three Spider Men. Plus, each team now has a Black actor on their side: DeWanda Wise kicks butt for Pratt’s side, and Mamoudou Athie is secretly helping the OG gang. Their stories make little sense, but they are most welcome. (Also briefly stuffed in here is the great Omar Sy, who seems to be passing through from “Lupin.”)

“Dominion” has about 20 homages to it, including a long one to “Indiana Jones.” Some of the new dinosaurs resemble Jar Jar Binks. There are also references to Godzilla, King Kong, Mission Impossible, James Bond movies, I lost count, frankly. Trevorrow and co have simply taken every idea they could think of, put them in a Cuisinart, and pressed “Frappe.”

So you take these six actors, plus Scott and the girl, eventually add in BD Wong from the original film and it’s like “Survivor.” With so much acting going on, where do you look? I felt Dern and Howard kind of took over the film. Howard has suddenly become an action star. She’s radiant. Dern is very much the authority figure. Neill is like a patient great uncle who can’t wait to leave. Scott, who’s very choosy about his roles, is a gem. When Goldblum — who knew his way around the original “Jurassic Park” — arrives on screen, he looks like he’s doing a TV ad for “Apartments.com.” But he quickly starts quipping and wins everyone over. When someone mentions “Jurassic World” — the park from the second trilogy — Goldblum doesn’t miss a beat. “Not a fan,” he says.

Does any of this matter? No. Critics are having a ball writing trash reviews for this last chapter. But I thought it was a lot of fun, a good popcorn entertainment. If you’ve been in for five movies, you’ll be back to see how it all ends. And then there’s always the dinosaurs, who are so well trained and behaved, and were so cooperative when they were filmed…oh wait…well, anyway.