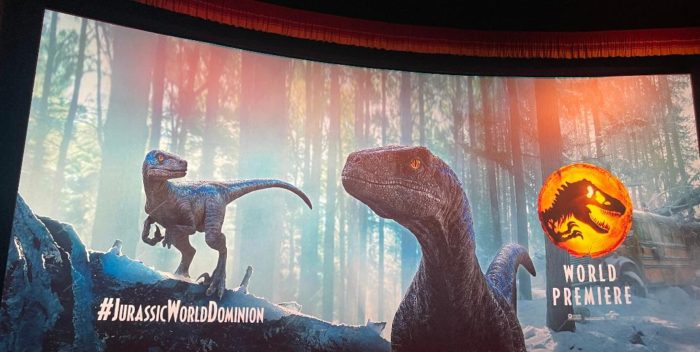 “Jurassic World Dominion” had its old fashioned and most welcome premiere at the TCL in Hollywood Monday night. Stars Chris Pratt, Laura Dern, Jeff Goldblum, DeWanda Wise, Mamoudou Athie, Campbell Scott and the lovely Bryce Dallas Howard along with the director Colin Trevorrow introduced the film. The intro got off to a cheeky start when the theater announcer welcomed the crowd to “Jurassic World Domain.” He corrected himself but Trevorrow saw low comedy hanging fruit and picked it; he then quipped to the crowd “Welcome to Jurassic Park Domain!”

Trevorrow recounted how over the nine years he’s been making these films that, “from children to adults, there is something about Dinosaurs that makes you reach out. Dinosaurs remind us of how very small we are. It’s a very lofty idea; going through the world thinking everything we do is so important and permanent. Dinosaurs are there to remind us that’s its very fleeting, we are just a small part of the wave of time.”

The director paid tribute to Universal Pictures for their support in making sure the film got seen in a theater. “We have found ways to share our experiences with each other over campfires, we tell stories and in the past 100 years or so we have done it in movie theaters. We have projected our lives on the big screen. Until March 2020 when all of that stopped, we all wondered if we were ever going to do it again. Universal said that was not going to happen. I’m so grateful for that support, and for Steven Spielberg for his faith and trust.”

Trevorrow then when thanked “the incredible crew and all those who rose to the occasion to put this industry back to work.”

We caught up with Colin at the after party; they closed Hollywood Blvd down for the soiree. He told us his next project is a prehistoric sci-fi adventure about Atlantis. Colin has said that “I’m a deep nerd. Atlantis is the only thing that equals Dinosaurs for me.” We then chatted with Bryce Dallas Howard and were joined by the respected Producer Keri Selig who introduced Bryce to her guests, Ukrainian refugees she was sponsoring. Bryce was characteristically gracious and wonderful chatting them up. Keri’s husband, Keith Addis, has been managing Jeff Goldbum for decades. Campbell Scott, who plays the villain of this piece, was accompanied by his son, Malcolm. “Jurassic World Dominion” is being released wide on June 10th and is loads of fun.