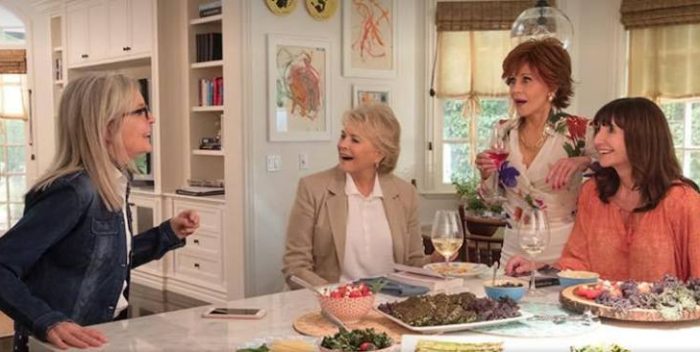 Ed Note: I published this piece earlier today, them miraculously a press release arrived two hours later. Coincidence? Are there any in this life?

It’s a little strange but a movie is shooting with four major stars and it’s never been announced.

“Book Club 2,” the sequel to the 2018 hit movie, is in production in Rome, Italy. It will be there through the middle of July.

Bergen confirmed the movie was happening when I asked her about it last month at a Broadway opening.

UPDATED The original “Book Club” was a Paramount release, but this one is not, according to what I’ve been told. It’s a Focus Features release this time. “Book Club” had some problems because the original producers split up when one of them — Andrew Duncan — was hit with a dozen or more sexual harassment claims by Hollywood insiders. Duncan’s partner, Alex Saks, bought him out of their company. Duncan’s story came in the wake of explosion of #metoo accusations following Harvey Weinstein’s downfall in late 2017.

So far “Book Club 2” hasn’t turned up on the internet movie database or anywhere else, but it’s shooting. The UK Daily Mail captured pictures of Fonda on set May 11th looking snazzy with red hair. Whoever releases the sequel will have a hit. The first one made over $100 million worldwide.

BTW, the first “Book Club” centered around reading “50 Shades of Grey.” Since this one is in Italy, maybe it’s an Elsa Ferrante book the women are obsessed with this time.