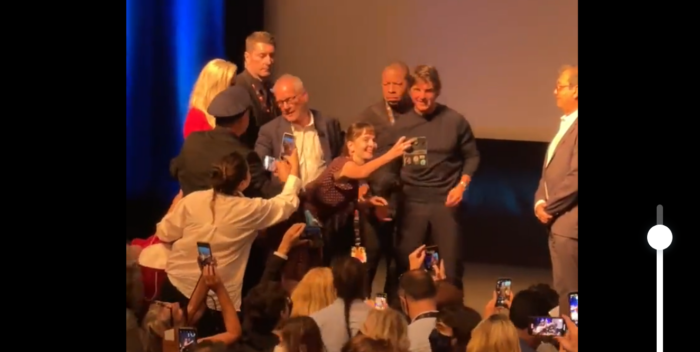 Tom Cruise appeared in Cannes this afternoon for a career retrospective discussion live on stage in front of an audience.

It was NOT a Q&A because the audience was not allowed questions. The moderator just allowed Cruise to ramble on, making inane and blank statements about filmmaking.

I know all this because both Variety and the New York Times covered it on Twitter. Variety’s Ramin Setoodeh also posted videos.

Setoodeh noted that in the montage of Cruise’s films, the only co-star omitted was Nicole Kidman, his ex wife. They made three films together: “Eyes Wide Shut,” “Days of Thunder,” and “Far and Away.”

From the videos and reports, Tom came across as a combination of Chauncey Gardner, Robert Redford’s “Candidate,” and Hal Phillip Walker from “Nashville.”

There were no questions about his actual life, his children, or when the last time was he’s seen his 16 year old daughter, Suri. Or whether she’ll get a discount pass to see “Top Gun: Maverick.”