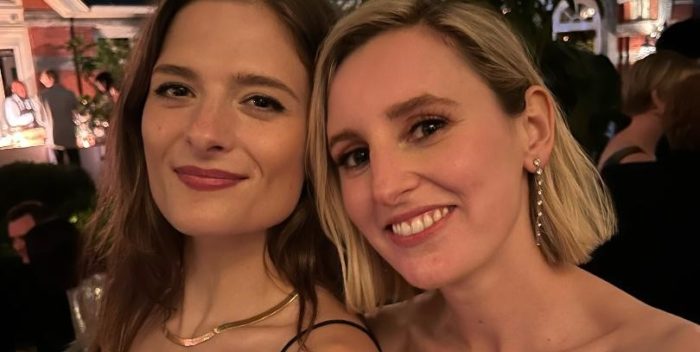 Stars from Julian Fellowes’ hit movies and TV series “Downton Abbey” and his HBO show, “The Gilded Age,” all got a chance to meet each other Sunday night at the A list premiere of “Downton Abbey: A New Era.”

The setting was the Metropolitan Opera House in Lincoln Center which has never shown a movie as far as anyone can remember. So Focus Features installed their own state of the art projection equipment, because, well this was a big deal.

Of course, COVID reared its ugly head. Even though everyone was masked and entry required proof of vaccination, one player in this film tested positive: Director Simon Curtis. Apparently he tested positive then negative. So Focus allowed him only to walk on stage, introduce his cast, and then get back to his hotel room for more tests. He had to miss his own party at Tavern on the Green!

The Met was full of actors from both series, plus movie stars like Brenda Vaccaro and Broadway stars like Cherry Jones. From “The Gilded Age” came Christine Baranski, Cynthia Nixon, Michael Cerveris, Deborah Monk, Celia Weston, and the very charming Louisa Jacobson.

Also present: Hugh Dancy, who has a big role in “A New Era” and is currently starring in “Law & Order” and his brilliant actress wife Claire Danes. (Spoiler alert: Hugh’s character makes a play for Lady Mary, by the way.)

Most everyone from the “Downton” repertory was on hand except for Maggie Smith, filming a new movie in Ireland, and Lesley Nicol aka Mrs. Patmore, whose husband, David Heald, passed away suddenly last week requiring her to return to London immediately. (I’ve had dinner with these wonderful people a couple of times, and this very sad. Condolences. He was a lovely guy.)

But the rest of “Downton” crew was in good form including Elizabeth McGovern (aka Mrs. Simon Curtis), Hugh Bonneville, Laura Carmichael, Michelle Dockery, Allen Leech, Phyllis Logan, and Michael Fox. And see if you can follow this: Dockery and Fox have just released an album of folk songs. In real life, Carmichael (who plays Lady Edith) is partners with Fox in a relationship. And McGovern is getting ready to release a rock album in June.

My full review of “A New Era” comes tomorrow. But I’ll tell you, the audience loved it. They cheered, clapped, laughed, and cried. This movie is so emotional at the end, you hear snuffling in the Opera House. Fellowes’ screenplay could not be better. Every single character has their moment, loose ends are tied up, fans of the series and the first movie will not be disappointed. If this is the end for the Crawley family on screen, “A New Era” is a triumphant finale. (And PS no one knows if there will be another movie.)

PS Fellowes got to meet a lot of “The Gilded Age” cast for the first time. Because of the pandemic, he was in London and they were in New York when they shot the first season. I don’t know who was more excited, but Jacobson may have won the night. She’s a star in the making.