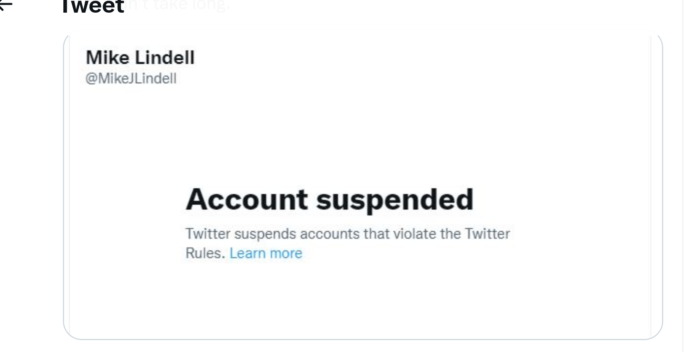 The right wing conspiracy theorist had been banned by Twitter permanently for helping to incite the January 6th insurrection. He was gone, and not allowed to return.

But this afternoon Lindell decided to try and come back. He started a new account called @MikeJLindell. Within two hours Twitter banned him again, permanently.

This is the second time Lindell tried to sneak back onto the platform after being permanently suspended. The first time was in February 2021 after his initial suspension.

Of course, Lindell posted a video announcing his return. I don’t think he knows the meaning of “stealth.” Instead, he bragged about sneaking in, and was immediately snuffed out.

This comes as Twitter is being purchased by Elon Musk, who may or may not reinstate the cranks and dangerous propagandists that Twitter chucked out, including Donald Trump. Maybe Lindell thought Musk was going to rescue him this time. But even Elon Musk needs to sleep sometimes, and he knows MyPillow is like sleeping on a log, not like one!

Mike Lindell today announces he has just created a new twitter account to try and evade his permanent ban. pic.twitter.com/M5VpFIMWra