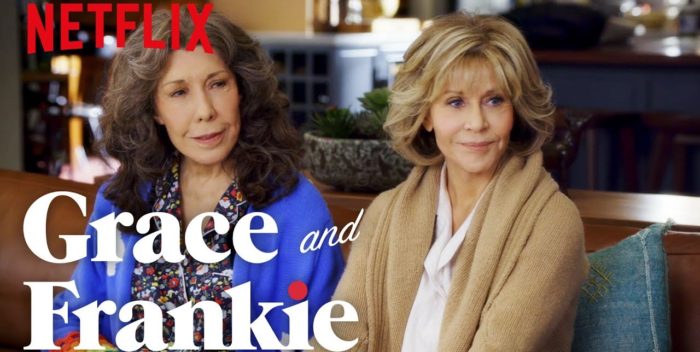 “Grace and Frankie” ends its seventh and last season now as Netflix drops the rest of the episodes. You will binge watch them, I guarantee.

The season finale, episode 16, is called “The Beginning.” You couldn’t ask for a classier, better ending to a smart, funny series. There’s a reason “Grace and Frankie” is Netflix’s longest running series.

From the beginning, Jane Fonda, Lily Tomlin, Martin Sheen, and Sam Waterston had a hit on their hands. The supporting cast wasn’t bad either, especially the very funny June Diane Raphael, and all the different guest stars who popped in and out as Grace or Frankie’s respective love interests.

In the end, though, the love that “Grace and Frankie” was about wasn’t the carnal kind. It was friendship late in life among survivors who weathered all kinds of storms. By the end of the show Frankie can’t hear and Sol is losing his memory. But that’s not stopping either of them, and no one gets maudlin, which is totally refreshing.

“The Beginning” offers a nice value added gift, too: it reunites Fonda and Tomlin with their “9 to 5” co-star Dolly Parton. It’s been FORTY YEARS since that movie was a hit, and it’s never gone out of fashion. I won’t spoil it, but you’ll get a kick out of Dolly’s turn.

I’d like to see a little Emmy action for “The Beginning,” for the actors and the writers. They did a bang up job. Ironic, isn’t it? All four of the show’s main actors have huge resumes with tons of awards and landmark projects. But these seven seasons will be what they’re remembered for years from now. And they can be proud of that.