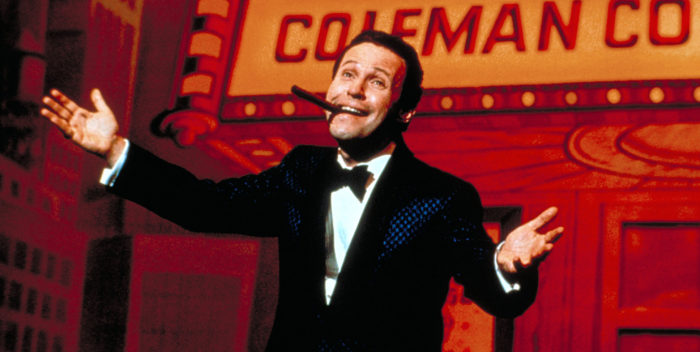 Buddy Young Jr. is back. Three decades ago, Billy Crystal’s character, a 70ish comic who was over the hill, was not so pleasant in “Mr. Saturday Night.” It was Crystal’s least popular movie. It was actually a downer at the time, and we thought Buddy and his pals were gone for good.

But tonight, Buddy is back, and he’s on top. Crystal himself is 74, and he’s reworked “Mr. Saturday Night” into a warm, wise, wonderful musical. Yes, it’s unexpected. But that’s what show business is, isn’t it? Talent and luck. Crystal felt there was more to Buddy than just being stuck in that movie. He was right.

Tonight, Crystal got plenty of adulation from the audience including heavyweights Steve Martin, Martin Short, Jimmy Fallon, and Tina Fey. More comics will be coming to see how Billy pulled it off. I can tell you how — with charm and lots of heart.

Not to suggest that “Mr. Saturday Night” is now G rated. Let’s say heavy PG-13. There’s a lot of toilet humor, as we used to call it, and jokes so old they have whiskers. A lot of the script is like a Friar’s Roast, with one liners, zingers, put downs and punchlines you can see coming a mile away. But Buddy is now so endearing, you’re hoping for material you’ve known all your life.

Buddy– famous way back in 1955 for a TV variety comedy show– sees his own obit card on the Emmy Awards one night in 1994, which brings his brother/former manager Stan (David Paymer, also from the movie, and very welcome) up from Florida. Once Stan realizes Buddy is alive and kicking, Buddy wants to cash in on the Emmy mistake, and winds up being interviewed by Gene Shalit on the Today Show, (Note: Shalit is still alive at age 96, I hope he can enjoy this moment.)

Buddy not only has to deal with Stan, but with his own long suffering wife Elaine (Randi Graff) and single 40 year old daughter, Susie, who blames him for her life (Shoshanna Bean). He also winds up with a new agent, a young Black woman whose name he purposely forgets all the time (played by Chasten Harmon, a real find).

The writers of the movie, Lowell Ganz and Babaloo Mandel, long time disciples of Garry Marshall, are back, and with Crystal they’ve reshaped the action so it’s a little meta, inside, and heartfelt, In the movie, no one liked Buddy. In the musical, they love him begrudgingly. And that’s all it took to fix this thing up.

There are songs. They are not demanding but they are catchy. Jason Robert Brown wrote the music. Amanda Green’s lyrics do what so few musical lyrics do anymore– they move the show along while also revealing the characters’ inner thoughts. This turns out to be a very good score even when some of the tunes sound familiar.

So what’s the takeaway? This is sort of “Death of a Salesman” with music and a happy ending. I wouldn’t be surprised or unhappy if Billy Crystal won the Tony Award for Best Actor in a Musical. He certainly deserves it. At 74, in good shape, this is a demanding job. Eight shows a week? No understudy, either, because without Crystal, there’s no show. (No slight to the others, but still…) “Mr. Saturday Night” is the kind of Broadway show you can recommend to anyone, and they will thank you later.

What more do you want?

PS Crystal gets to mug a little, throw in his imitations of Marlon Brando and others. He has to stop himself, I’ll bet, from blurting out “You look mahvelous” to someone on stage or in the audience. If he did say it, no one would be unhappy.