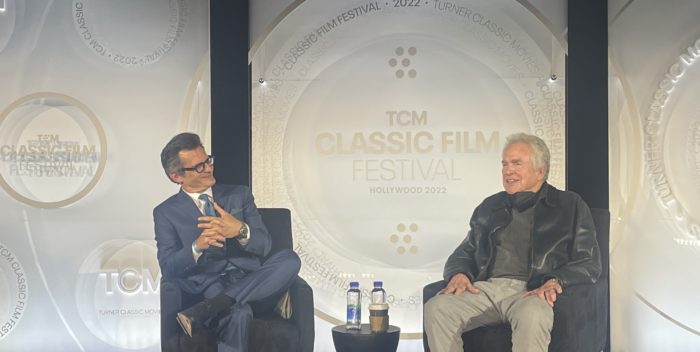 Warren Beatty was given a rapturous standing ovation last night at the TCM, Turner Movie Classics, Film Fest at the TCL Chinese theater in Hollywood.   TCM just screened Beatty’s classic 1978 film “Heaven Can Wait” where he joined TCM host Ben Mankiewicz for a conversation.  Beatty, was game, whimsical and funny to the packed crowd’s delight.

Ben started out by asking  “How long were you thinking of wanting to direct? “

Beatty replied, “I was a Producer longer than a director and for this one, I felt I couldn’t avoid it.”  He went on to explain “Originally, I wanted to do it with Muhammad Ali, I was very friendly with him. He was a good actor, I loved him.  He wanted to do it, but he couldn’t.  So, I changed the character to football because I played football in college, I was not bad.” Beatty mentioned that at first the football scenes in the movie were to be real football players, but then he decided he didn’t want to be “knocked out silly.” Mankiewicz replied that he was glad he did that because “your face was probably worth protecting.”

Beatty then went to praise director Robert Altman with whom he worked on “McCabe and Mrs. Miller,” as well as his former paramour Julie Christie whom he described as “always being an inspiration to me as an actress and a person.”  He noted that the key for him is collaboration;  people like Elaine May (whom he worked on the script with) and Buck Henry who co-directed and co-stars in the film.

“Elaine is a genius and Buck was an incredibly talented, collaborative and sane guy. “

Would he ever write his own memoir?  Beatty, who just turned 85. answered, “That’s a big subject.  Yes, I think about it and I almost do it.  But, it’s dealing with that whole area of narcissism. It explains why I never cooperated with a book; I was hoping to conceal my narcissis. “ He continued, “I don’t read books about me.  Maybe I read ten pages., then I say ‘oh please.’ To me, it’s history and history is over.”  Wouldn’t it be a challenge to write about your life honestly, the actor-director was asked?  Beatty deftly answered, “You have to define honest. If you’re going to be very honest, there are a lot of things and people you could be negative about.  I don’t want to do that.”  But then added, “I’m not saying I won’t do it.”

Mankiewicz pointed out that Beatty ‘only ‘directed five movies, why is that?  Beatty answered, “I made it a point to indulge in this little thing called life. I have been fortunate with my superior half” –how he refers to his wife of 31 years actress Annette Bening — “and to have four kids who are older now.  That became more infatuating for me.”  He added, “I normally don’t even make a lot of movies anyway.“ He told how during Covid, “I have become one of the most skilled, brilliant washer of dishes that you could possible imagine.  And my superior half has become a master chef. “

Will he make another movie, whether acting, producing or directing?  Beatty replied, “Movies don’t come along, you bring them in.  The answer to your question is I don’t know yet.” Mankiewicz pointed out that in real life he and Warren are friends, and often dine at the LA institution known as The Apple Pan. He talked about Warren discovering potato skins for the first time and how he called Annette with excitement talking about he discovered. Warren went on to praise Annette.   “My wife does whatever she wants, she’s always right!  I’ve been very lucky.”

Mankiewicz ended the night with wise words. “You are one of the of the defining actors, producers and directors of your and every generation that has followed. You make all of our lives markedly better. “  After which Warren received another, even longer, well deserved standing ovation.