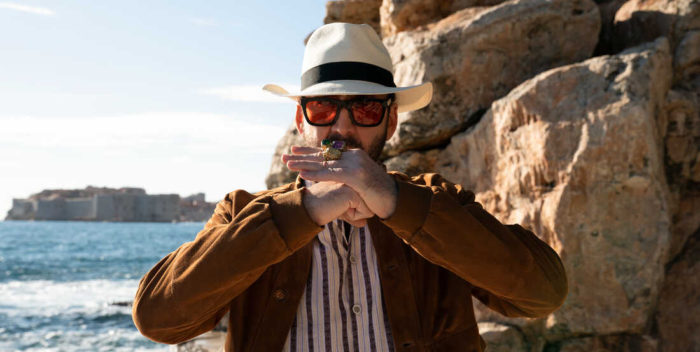 Nicolas Cage’s latest spoof on himself “The Unbearable Weight of Massive Talent,” uses his huge talent, self-deprecation his appeal and affability to his total advantage. Charming Cage has been in over 100 movies, some classic, some D list, Cage admitted he had massive debt to pay off. But “Massive” (wish it were a better title) is a smart move.

Nic plays Nic; he’s lovable, maddening and true to his celebrity status, narcissistic. Directed by Tom Gormican with a script by him and Kevin Etten, the film works because of Cage’s self-deprecating affable way; he throws himself into this role of himself with abandon. Cage is struggling to forge a close relationship with is daughter, (played appealing by Lily Sheen) and navigating his still friendly but fraught friendship with his ex-wife Oliva (Sharon Horgan.) All the while he is beyond desperate to get back to his once lauded career. His agent (Neil Patrick Harris) presents an offer that literally Nick cannot refuse. Be a guest to the humongous fan Javi Gutierrez (Pedro Pascal) for a million bucks. Cage has no choice; he’s run up at $600,000 bill at the Sunset Tower which needs to be paid. He flies to Spain where Javi is revealed to be an international criminal., which Nic and his agent didn’t obviously know. Despite the obstacles, a true bromance develops but gets rudely interrupted when two CIA operatives, a terrific Ike Barinholtz and Tiffany Haddish, recruit Cage to snitch on his now BFF Javi.

Kidnapping, action sequences, shoot me ups, it’s all there, along with a wonderful score which includes spaghetti western and flamenco guitars, by Composer Mark Isham. The film is ‘wink, wink’ smart and quippy throughout. Cage has scenes with his CGI’d younger self which are a treat to watch.

Perhaps Gormican took inspiration from talented filmmaker Adam Rifkin’s excellent “Last Movie Star” in which Burt Reynolds spoke to his younger self. The bottom line is that the film is a slapstick, action joy ride for Nick Cage fans. Cage is the real deal, he’s a movie star with longevity and respect with a devoted fanbase spanning over generations. It’s been an up and down ride for him, but “The Unbearable Weight of Massive Talent” is a top-tier treat to watch.