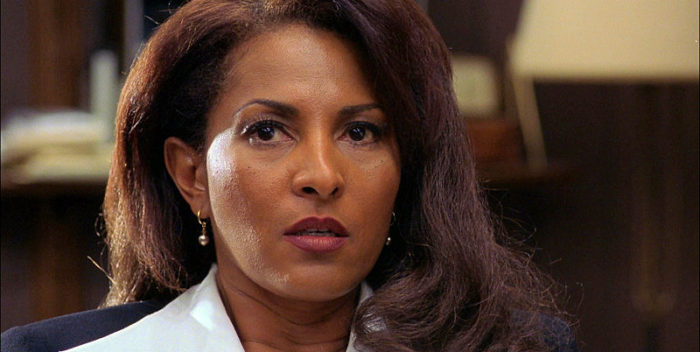 Introduced by TCM general manager Pola Changnon, the iconic 72 year old star bounced on that stage like she owned it, because she does. Pam was just 24 when she was cast as the lead in “Coffy” a Blaxploitation, low budget raunchy and violent action-packed movie (which will be shown at the festival with Pam giving the introduction). Pam later went on to kick ass in classics such as “Foxy Brown” in 1974 and had a career resurgence with Quentin Tarantino’s “Jackie Brown.”

Grier explained her love for the movies. “I’m a film maven. In snowstorms I watch 3 or 4 movies a day. I get to see the narrative and culture from so many people. we’ve lived and experienced so many things. So sometimes they change. Our curiosity, our political position, our culture, our ideas, it’s so important that you continue to show all these incredible movies.”

When Pam saw TCM host Ben Mankiewicz out of the corner of her eye she let out an appreciative shout out. Mankiewicz hosts the mega popular TCM Podcast “The Plot Thickens”; the upcoming season will be about Pam’s singularly remarkable life story. How did Pam become best known for portraying touch, sexy crime fighters? “My great grandmother lived in Wyoming. She was the first black ‘Annie Oakley’ or ‘Foxy Brown‘ if you will. She had a hotel for the Blacks and the Chinese who worked on the railroad. She was also a sugar beet farmer. She taught my grandfather how to treat us girls to do anything a boy could do. Bring the tractor in and change tires, you name it. That’s how I got tough.”

Pam just finished a film in Atlanta and is thankfully working often these days. She mentioned that in a recent interview she was asked how did all those action films? She quipped, “I just don’t know how I did them all without a sports bra!”

Lily Tomlin will be feted with a hand and footprint ceremony on Friday.

Other notables at the TCM Fest include Piper Laurie, Bruce Dern, and Disney animator legend Floyd Norman.  Our pal, film journalist and historian Leonard Maltin, will receive the Robert Osborne award on Saturday. Spielberg comes back to the TCL Chinese Theater on Saturday night for the 4K restoration of George Steven’s iconic “Giant” which he worked on with The Film Foundation, including Martin Scorsese.

But back to Pam, as she looking around on the stage she announced, “I guess I’m a classic now!”  You sure are Pam!