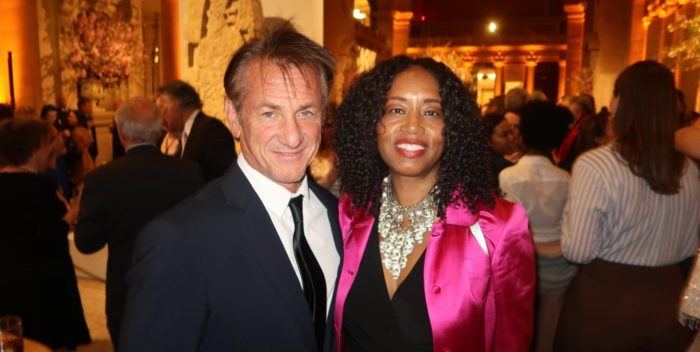 By the time we braved last night’s monsoon up to the Metropolitan Museum of Art, Sean Penn was already receiving kudos for his performance as John Mitchell in Starz Channel’s “Gaslit.”

Considering Sean had just returned from filming a documentary in Ukraine, he was suntanned and glowing. I’ve known Sean a long time — let’s say 30 years but it’s more — and I’ve never seen him so happy and relaxed. And smiling. Listen, after two Oscars, why not?

He did not smelt his Oscars after Vladomor Zelenskyy was absent from the Academy Awards. (He did turn up on the Grammys.) But Penn told me “you can’t believe what we saw there” about Ukraine, and that’s something coming from a man who’s spent a lot of time witnessing destruction in Haiti. Sean says his brother, Michael, the singer-songwriter married to Aimee Mann, is busy researching their family’s roots in Ukraine and Russia. Their late director father, Leo Penn, was the son of Russian-Jewish immigrants. We talked about the similarities when Ukrainians fled to Poland a hundred more years ago when the Russians staged pogroms. “Yes, and now they’re going back,” he said of the brave people, “which is really interesting.”

But back to “Gaslit,” in which he plays the loathsome Watergate era Nixon attorney general Mitchell. Sean was just becoming a teenager in the summer of 1973 when the Watergate hearings took up our lives 24/7 on television. When I mentioned them, Penn said: “We were riveted by those hearings, and hated him.”

What’s really interesting about Penn’s Mitchell is that he’s a heck of a lot more charming than the real guy, who was anything but. “I know,” said Sean,” but you know he and Martha had quite the sex life apparently. They were really hot for each other until they weren’t.”

Starz has it first critical awards worthy hit with “Gaslit,” which also stars Julia Roberts as Martha Mitchell (she skipped the party) and Dan Stevens as John Dean. The latter brought a lot of pals from Brooklyn with him including “power couple” Rebecca Hall, coming off her tremendous success with “Passing,” and husband Morgan Spector, aka Mr. George Russell of HBO’s “The Gilded Age.” Also at the Met: Alison Tolman and John Carroll Lynch, who will each appear down the line in “Gaslit,” as well as the show’s director, Matt Ross, who helmed all 8 episodes.

Lynch, by the way, told me he’s finally done with “Big Sky,” where was he was killed off twice as two different characters. He laughed, “My work there is done.” The very talented character actor is going off to Edmonton, Alberta, Canada to direct himself in his second ever indie feature. (His first, “Lucky,” starred no less than David Lynch and Harry Dean Stanton.) The shoot takes place in September because you have to be out of Edmonton by October 1st if you don’t want to be frozen solid!