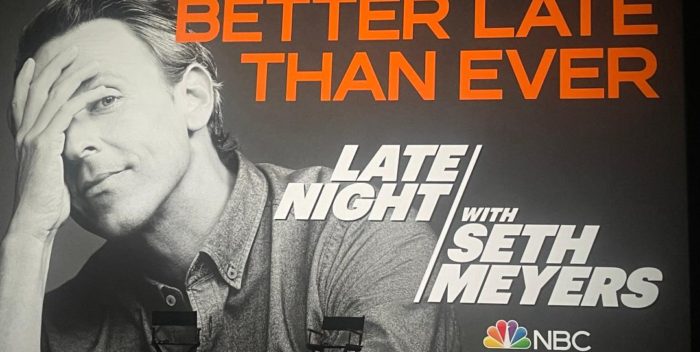 Now that Oscar season is in the rear-view mirror, Emmy season is in full swing. The shows and their stars are front and center courting voters. This past week at the Harmony Gold in Hollywood, Seth Meyers, host of NBC’s “Late Night With Seth Meyers,” was there in front of a packed house for a conversation adeptly moderated by our pal Pete Hammond from Deadline.com.

Meyers currently has a bestselling children’s book called “I’m Not Scared, You’re Scared” and was asked what possessed him to write it. “Having kids, and having an ego. I’d rather read them my words. They don’t watch my show. They’re Trump supporters.” Meyers was asked later if Trump was a gift to comedians. “No not really. I’d rather he wasn’t around. I’m also not going to pretend he’s not around just because he puts me in a bad mood. It’s a serious thing, he’s a real thing. As much as some of us want to move on, we’re not going to do that till we feel like it’s over.”

Hammond asked him about Marjorie Taylor Greene recently reporting Jimmy Kimmel to the Capitol police over a joke. He quipped, “I tipped her off. Kimmel loves pranks so I thought he’d like that.” Speaking about the infamous post-rehab interview with comedian John Mulaney where Meyers was a part of an earlier intervention to save his good pal’s life, he commented “every now and then you have to create space for something like that. It’s easier with someone you know and love like John. But you do feel lucky at those times to have a platform to let something very authentic like that happen. I had Jerrod Carmichael [he recently came out as gay] on last week and had a similar feeling for someone I have such love and respect for. To share a thing like that on your show, well you feel very fortunate.”

His best memory of “SNL”? Seth recounted, “There are so many, but Stefon’s wedding with Bill Hader. We were live at the desk; I ran off to get him. I was backstage with Bill we were holding hands backstage watching the video and we both got emotional, we started crying. It was his last show, it was Fred Armisen’s and Jason Sudeikis’s last show, the previous year Andy Samberg and Kristen Wiig left and I would leave a half a year later. It was the end of this special time. It was in May and I was getting married that September and I’m thinking ‘oh I’d better cry at my real wedding.’ And I did. That’s the good news.’ His best advice to young comics? “Get up on stage every time somebody asks you. Because you never know the person that could change your life will be in the audience. Be out there.”

“Late Night” is way overdue for an Emmy for Best Variety/Talk Show, by the way. Meyers’ “A Closer Look” is one of the most insightful, humorous, and well written regular segments anywhere. And unlike some other shows in that category, “Late Night with Seth Meyers” is on five nights a week, with rare weeks off for reruns.