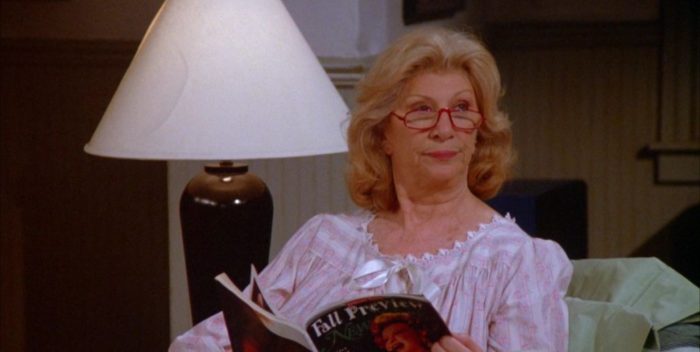 RIP Liz Sheridan, who played Jerry Seinfeld’s mom memorably on Seinfeld, has passed away at age 93. This follows the death of Estelle Harris, who played George’s mother.

With the deaths of Jerry Stiller and Barney, all the parents from “Seinfeld” have gone on to their great reward. They were a devastating quad of veteran actors who gave us lots of laughs.

Sheridan had a long resume even by the time she got to “Seinfeld.” Her other unusual claim to fame was an early romance with James Dean whom she wrote about in a memoir, “Dizzy & Jimmy: My Life with James Dean: A Love Story.” Ironically, her story sort of mirrored a “Seinfeld” plot of Susan’s father having a youthful romance with John Cheever. Sheridan was also great pals with “Bewitched” star Elizabeth Montgomery.

The beauty of Liz Sheridan’s performance as Mrs. Seinfeld was that she played it seriously, not for laughs, and like Harris, she was hilarious. This wasn’t easy considering the men they played with in scenes. Barney Martin’s fuming over Cadillacs and stolen pens at Del Boca Vista only made Sheridan more intransigent in her delivery — not to mention her dealing with Uncle Leo. She made all the wild stories believable.