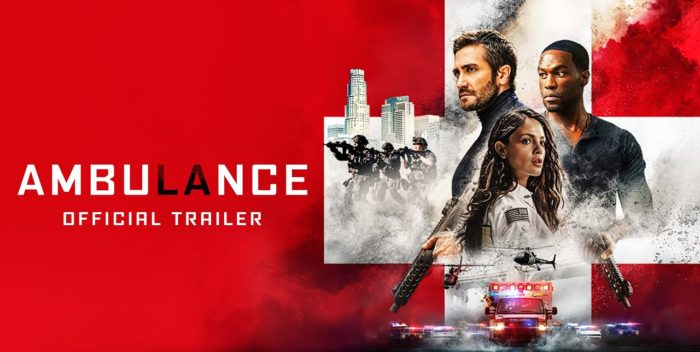 The one thing you’ll need when you see Michael Bay’s “Ambulance” is a drink and /or nap after it’s over.  Bay does what he does best; escapism filled with high-speed drama, crashes, shoot me ups.  He makes use of everything in his action-packed kitchen sink.  Ironically this is a streamlined Michael Bay movie.

Bay is more focused than usual; he sticks to one outrageous maddening and freaky situation and mines the hell out of it.  Doesn’t hurt that the gifted Jake Gyllenhaal’s (Danny Sharp) has a take no prisoners chew everything in sight terrific performance.  Yahya Abdul-Mateen ll (Will Sharp) adds sincerity and heart and the sassy, strong EMT Eiza Gonzales (Cam Thompson) are worthy scene partners with Gyllenhaal.

The film is based on a 2005 Danish thriller of the same name by the filmmaker Laurits Munch-Peterson, with a script by Chris Fedak.  The action takes place in one day with Will Sharp having a tough morning.  See Will is a decorated war hero and his wife Amy (Moses Ingram) is severely ill, with a baby son in tow.  His paltry insurance won’t cover the $231.000 for the surgery that she desperately needs.  He lies to his wife and instead of going on a job interview, he reconnects with his estranged brother Danny who happens to be a career criminal.  Will joined Danny’s family when he was a young child.  Will asks for a loan, but Danny makes him an offer he can’t refuse. Help him and his crew pull off an LA Bank Heist, and Will gets a share of the $32 million they will supposedly pocket.  Will feels he has no other choice but to take part. All gets well until a pair of cops Officer Zach (Jackson White) and Officer Mark (Cedric Sanders) surprise the robbers because Zach wants to ask one of the tellers on a date.  The plan goes south quickly.  Will and Danny split holding Zach hostage, they then hijack the ambulance with Cam aboard and take Zach and do whatever they need to do to keep him alive.

All this as they are being chased throughout LA.  Gyllenhaal is so, so good; he goes from charming and sane to lethal and insane in one second.  He raises the film to another level with his bravado, charismatic performance.  The SIS Captain (Garret Dillahunt) as well as other supporting players, along with real life cops, SWAT teams, snipers and the like all do worthy nods. The nonstop stunts, booms, explosions, flying bullets, it’s all exhausting and fun to watch.

But this is Michael Bay and his entertaining excesses make up for anything this film is not.  It is what it is and that’s where Bay succeeds, with his glossy, no holds barred, loud and slick showmanship.