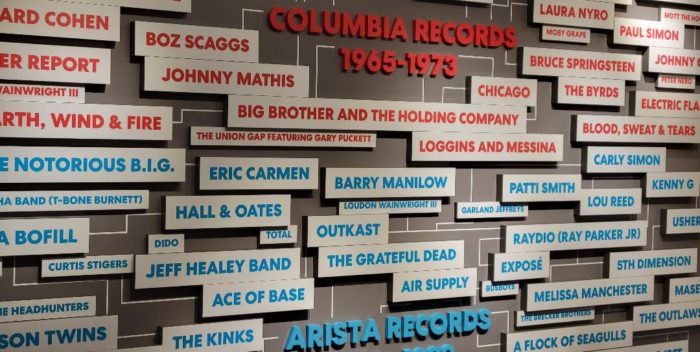 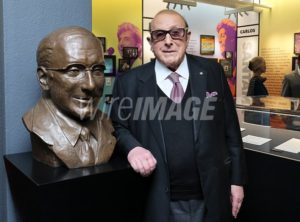 Brooklyn, you say? Yes, just over the Brooklyn Bridge in an area of all new sparkling buildings. On the first floor and the floor below dozens of friends, family, and press crowded into a permanent display chronicling Davis’s 60 year history. There’s a giant wall of gold and platinum records leading from the main floor down to a hugely impressive installation that covers Clive’s career from Columbia to Arista to J Records and back to Sony Music. Everything is interactive, there are touch screens, bluetooth music, headphones. You must see this place. Kudos to Jason King, who’s been working on this for two decades.

But it’s upstairs at 370 Jay Street that your breath is taken away. Two floors of recording studios for NYU students. They’re learning the whole business up there. It’s all state of the art, and young people are all over the place making music and getting information about the history of popular music and how they might forage ahead in it.

Then the whole group picked up and moved over to the legendary River Cafe under the Brooklyn Bridge, still the most magnificent spot in New York. The food is also delicious beyond reason. I ran into the owner Buzzy O’Keefe— I met him in 1984. Talk about longevity! Buzzy also owns the Water Club on the Manhattan side of the East River, and a few other popular spots.

The entire room sang “Happy Birthday!” We toasted Clive, and then raised a glass at our table to Aretha Franklin, who was with us in spirit, and Whitney Houston, represented by her brother, Gary, and his wife, Pat, who run Whitney’s estate. They told me that Cissy Houston, the beloved matriarch of their family, is doing well and sends her love.

This is what happens at a Clive Davis dinner: Ray Parker. Jr. of Raydio and “Ghostbusters” fame heard me talking about meeting KC. He said, “Is that really KC? I never actually met him but look at this.” He showed me a picture on his phone from the 70s of Casey and Cher. Casey was wearing a Raydio T shirt. No sooner than he showed us than Joyce Moore, wife of R&B legend Sam Moore, took him by the arm to meet KC. Ray came back smiling from ear to ear!

Eventually Clive took the microphone after a moving toast from NYU president Andrew Hamilton. That’s when we were told to go home and get some sleep. Tonight’s party downtown is a seated dinner for 620 people. Clive warned that, like all his parties, this one will go very late. I’ve heard rumors of bold faced names coming so big that we may never get out of there!