The stories about Bruce Willis today are rampant and a little incorrect.

Bruce’s “aphasia” is just the latest development in a seven year decline. He’s had cognitive issues for at least seven years.

It was the summer of 2015 when Bruce was replaced after a day’s work on Woody Allen’s “Cafe Society.” I was told that he could not remember his lines, and bowed out. He wasn’t fired. It just wasn’t possible for him to do the work.

Steve Carell replaced him in the film overnight. At the time, there was speculation– no facts — that Willis had been fired. In the past, Woody had replaced actors in other movies when things didn’t work out. But this case was different.

I saw Bruce at the all-star premiere of Barry Levinson’s “Rock the Kasbah” in the Hamptons a day after the announcement was made. He told me he left on good terms with Woody but it was too difficult to shoot the movie and prepare for the play “Misery” on Broadway. Previews were set to begin on October 22nd– two months later. In fact:  “Cafe Society” would not have overlapped, and Willis would have had plenty of time to rehearse “Misery.”

When “Misery” did begin, Willis spent most of his time on stage in bed– just as James Caan had in the movie. He was fed his lines through an earpiece. Bruce got scathing reviews, and “Misery” closed early after just two months. 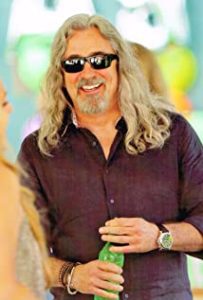 The next time I saw Bruce was unexpectedly– on May 3, 2016 backstage at Steven Tyler’s solo concert at Lincoln Center. We were in the Green Room. Bruce came accompanied by his pal, Stephen Eads, who seemed to be his monitor. Bruce was mellow. We talked about daughter, Rumer, who had just played a few nights at Cafe Carlyle in Manhattan. (She was very good.) Bruce never did attend any of the shows. When I told him how good Rumer was, he responded vaguely– not about her singing, but about her being there at all.

Eads, who has kind of Jerry Garcia long hair, soon took over Bruce’s life. He’d already had some form of producer credits on Bruce’s movies starting in 2000. Now the number is up to around 30 — all of Willis’s projects in the last 32 years. ‘

But 19 of them have been since 2015, when Bruce went into decline. In almost all of them Willis has had second billing younger, B list or C list actors. WIllis was once the highest paid Hollywood star. But beginning in 2015, under Eads, he began plyaing second fiddle to the likes of Jesse Metcalfe, Frank Grillo, and Chad Michael Murray.

Not everything coming out today about Bruce’s condition is accurate, I’m told, and there’s still the matter of how much he understood about this avalanche of fire sale films.