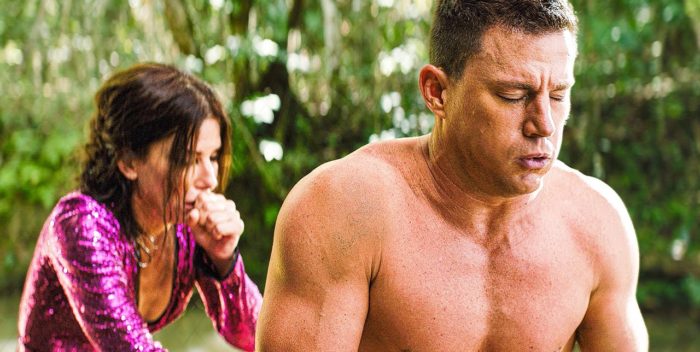 We’ve seen “The Lost City” before, unless you’re born yesterday or a shut in. It’s a lite version of “Raiders of the Lost Ark,” a cousin of “Romancing the Stone” and about a dozen others that have come before.

So let’s set the premise aside. There are so many leaps of faith and logic you have to make, you might as well. The set up is that Sandra Bullock is Loretta Sage (yikes), a romance writer but a brainy one. Her books are hits. Channing Tatum’s Alan’s whole career is, improbably, posing on her book covers like Fabio, shirtless with a long wig. Da’Vine Joy Randolph is Loretta’s patient, all knowing publisher. Loretta seems to be her only author. (Makes no sense, must be a tiny mom and pop book company like Harlequin in the early days.)

Anyway, Daniel Radcliffe is sort of Roman Roy or a dumb Murdoch billionaire kid who kidnaps Loretta. He believes material in her book is real and will lead him to a lost city on an island in the Atlantic. So off they go to the island, and Alan follows them to rescue Loretta. He brings along a kind of adventurer named Trainer played by Brad Pitt, who’s going to help him in this effort.

That’s all you need to know. Pitt leaves the scene very soon after being introduced which is too bad. There’s a little hope for something really good when he’s on screen. After he’s gone, Bullock and Tatum are sent in a formula deal where they spar and don’t get along but eventually fall for each other.

The charm of the main stars goes a long way to distract from the well traveled plot and the disarmingly bad dialogue. Four people worked on the screenplay– the sibling directors Adam and Aaron Nee, and Dana Fox and Oren Uziel. Someone obviously wanted this to be glib and “Deadpool”-like. And someone obviously didn’t. So these two tones are at war with each other. Sometimes the script is meta and inside, and sometimes it feels cut and pasted from the 1980s.

The production design is excellent, and so are the bodies of the stars, which are perfect. Sandra Bullock was born the year the Beatles came to America, and she is ravishing. She has an Oscar and can take any project, but I wish she’d get some better material (better than “Bird Box” or “The Unforgivable, her two most recent movies. She says she’s taking a break, but I hope she’s not gone too long. She needs to play an adult and not a ditzy 57 year old.

Channing Tatum has been to the gym. We get that. He’s really put in his time, I guess, because he’s got another Magic Mike movie coming. A hunk in this one, he’s really playing Lou Costello. He gets a lot of credit for this. Especially when Pitt is on the scene, Tatum has to play a lovable fool. He pulls it off with aplomb.

There are worse things than a little familiar entertainment supplied by old friends. So I’m going to look the other way with “The Lost City.” Grab the popcorn and diet soda, kick back in a theater, and enjoy it for what it is. There are previews on Saturday night and a hard opening next week.