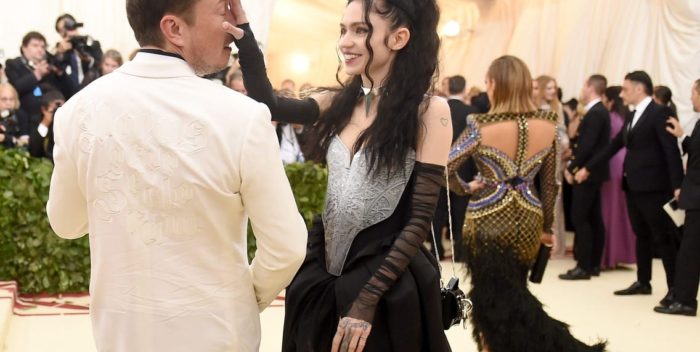 Grimes is kind of a maker of electronic music and a singer sorts. Her real name is Claire Boucher and she’s from Vancouver.

Grimes in on the cover of Vanity Fair for April, in which the writer of her profile discovers that Grimes has a baby, a second child with Tesla founder Elon Musk. (Musk has older children, a set of twins and a set of triplets.)

But what Vanity Fair doesn’t know is that Boucher has left Musk and moved on with Chelsea Manning, formerly Bradley Manning, the court martialed whistleblower who went to jail, changed sexes, and is now finally out in the world again.

Could you make this up? Would anyone believe it?

Grimes’s children are named X and Y. Actually X has an unpronounceable name that reads l X Æ A-12 and Y is short for Exa Dark Sideræl Musk.

Musk is the richest man in the world, sending people to space in his rocket ships, selling electric cars that sometimes blow up. Do Musk and Grimes have legal agreements? Vanity Fair doesn’t get into that. Does Musk like her “music’? We don’t know. But Grimes sounds like Yoko Ono most of the time, shrieking to a Casio keyboard, as if Nina Hagen had hooked up with Gary Numan during his “Do You Need the Service?” era.

Are friends electric? With Musk we know cars are. Musk, Numan. “Cars.” Here in my car…

Page Six says Grimes and Manning are now living together. Manning disclosed to WikiLeaks nearly 750,000 classified, or unclassified but sensitive, military and diplomatic documents.  She was in jail for seven years between 2010 and 2017. Clearly, Manning will not be going to work for Musk any time soon.

Do any of them actually drive a Tesla?

Manning is set to release a memoir later this year, but not about the whistleblowing case. I guess she needed some other material. Well, she’s got it now!