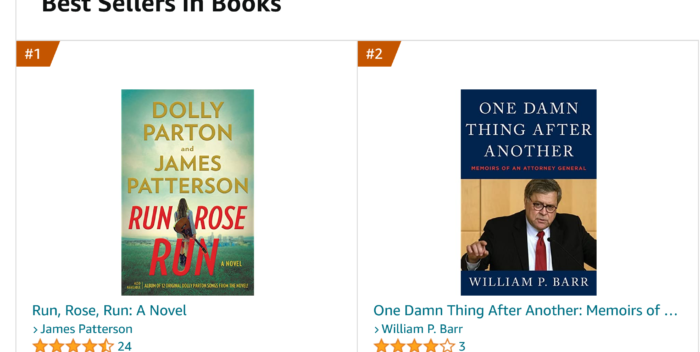 Country superstar Dolly Parton is no stranger to the top of the music charts.

This morning, Dolly has the number 1 book on Amazon. It’s called “Run, Rose, Run” and it’s from the James Patterson publishing mill. Both of their names on the cover, even if neither of them actually put pen to paper.

“Run, Rose, Run” is about a young girl singer who arrives in Nashville with a load of secrets and ambitions. Armchair reviewers on amazon are less than impressed. One wrote: More than once I thought this was based on the television show Nashville. About halfway through the book, I stopped even calling her Ruthanna and just called her Dolly. She along with the other characters are all slightly damaged in some way. Emotional trauma. Secrets they can’t share. But the past always catches up to us. And Annielee is about to find that out.

Parton has already a soundtrack album of new songs she wrote for the occasion also called “Run Rose Run.” It’s number 5 on iTunes. Ironically, as bad as the book is, the album is quite good. It shows that Parton, 76, is at the top of her game musically, and that’s all that’s important. Patterson is a cynical guy who slaps celebrities’ names on his “books” and makes the cash register ring but contributes nothing to the world of letters. He’s probably the whole bottom line for Little, Brown publishers.