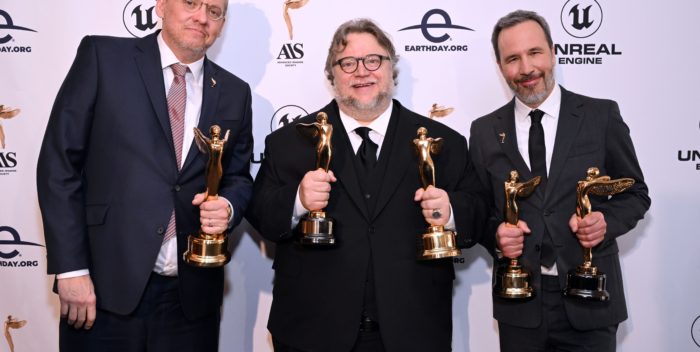 The Advanced Imaging Society recently held their 12th Annual Lumiere Awards at the Beverly Hills Hotel. Filled with respected artisans that do all aspects of film and television, from VR, music, High Frame Rate, HDR, 3D conversions, live action and animation, and more.

Jim Chabin, President of the AIS, jokingly called the room, ‘the geek Oscars.’ Three Oscar Nominated directors garnered awards for their films and their work. Guillermo del Toro for his “Nightmare Alley as well as receiving the inaugural Gene Kelly award. Adam McKay received the inaugural Voices for The Earth Award and Denis Villeneuve to receive the Harold Lloyd Award and the award for best live action feature.

Guillermo Del Toro, always his eloquent poetic self, told the esteemed crowd after accepting the Best Audio for theatrical for his much lauded “Nightmare Alley”: “We stopped the movie for 6 months because of Covid. On the last day of shooting the first time, Rooney Mara came in and said to me, don’t tell anyone but I’m pregnant. I said that’s fantastic. Then we re-started. And I can tell you when she crosses that door from the station to the toilet, she’s pregnant on one side and had the baby on the other.”

Equally eloquent Patricia Kelly pointed out of her late iconic husband Gene: “Some of you may not know that Gene wanted most to be remembered for being behind the camera as a director and choreographer. Especially for changing the look of dance on film. He was determined to find new ways to capture dance. He worked with color and light in the ballet for “American in Paris.” In “Singing in the Rain” he quite literally brought dancing into the streets and gave it a bold, new kinetic energy. Gene maintained a childlike sense of enchantment throughout his life. He loved poetry, fables, Irish ghost stories. He was a true visionary; pushing boundaries and always looking for the next horizon.

She then presented GDT with the award, calling him, “another great artist of vision.” Guillermo quipped, “When I heard about this award, I thought maybe someone had finally seen me dancing! Then I thought, no maybe it’s for something else!” He went on to pay respect to the brilliant Gene Kelly. “The fact is that Gene Kelly was a futurist. He was a man who was painfully aware of where the art form was and where it could be taken. He was a link to the perpetuity of the art. What he did with the camera, that the camera becomes the lyrics, the camera dances with the actors. Being part of a tradition and pushing it forward is something that I value a lot. We should preserve the past so we can change and recognize the future. We are not by any means gatekeepers. We are gate holders. So that the next generation can storm the castle and go through the door of the past.” He went on to say, “I couldn’t identify more with an artist then I do with Gene Kelly. He completely transformed the art that he touched. He made it even more cinematic if that was possible. He gave his all. He pushed it in every single aspect; sound design, composition, color, nothing was accidental as I try to do in my films. “

GDT  thanked everyone that worked with him on his current release,  “Nightmare Alley,” saying it’s made him the proudest of all his work. “It’s a movie that tries to take a genre and reclaims it for the future. The fact that we are honored by the AIS which understands that we all live in the crossroads of what is possible and what should be possible is very significant for me. “