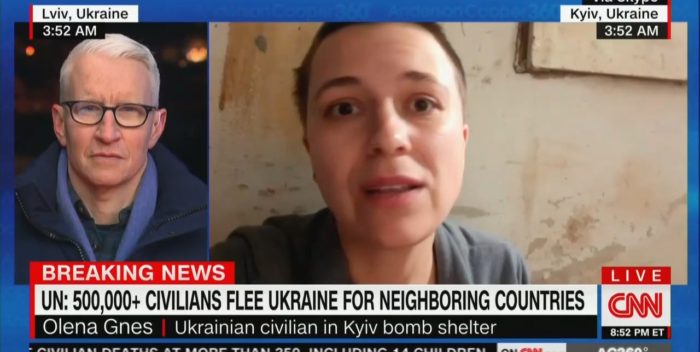 End of the world? Nuclear war? Not such a good thing.

But for CNN, break out the Champagne!

When I wrote the story of Jeff Zucker’s ouster from CNN on February 3rd —  one month ago– CNN’s prime time ratings were shockingly low. All the shows — Jake Tapper, Anderson Cooper, Don Lemon — were averaging 600,000 viewers a night. Erin Burnett was doing a little better with almost 700.000.  But Fox News was bringing in two-and-three- million at the same time. Things were bleak at CNN.

But then came crazy, evil Vladmir Putin. Mad Vlad threatened to blow up the world. His invasion of Ukraine is no joke. It’s serious and legitimately scary. And when that kind of news breaks, people turn to CNN.

In the last week, all the CNN prime time shows are up by a million or more viewers per night. When the network sent Anderson Cooper to Ukraine last night, his numbers shot up by 2 million! Last night, he scored 2.3 million viewers! It’s kind of amazing that he went there since his second son was born just three weeks ago.

But Cooper live from a catastrophe has always been a hit. Remember when he was standing hip deep in flood waters during Hurricane Katrina? The CNN viewers like a cliffhanger.

The Russian invasion has been good for Fox News, as well. After Trump lost the election in November 2020, their numbers receded as well. But now their prime time block is averaging 4.5 million a night for viewers who want a lot of misinformation and jaundiced views about how Biden is handling this disaster. (He’s done a great job, which Fox News refuses to admit.)

So war is hell, but not for ratings. If only Zucker hadn’t had his other issues, he could be enjoying the fruits of his staff’s labor right now!