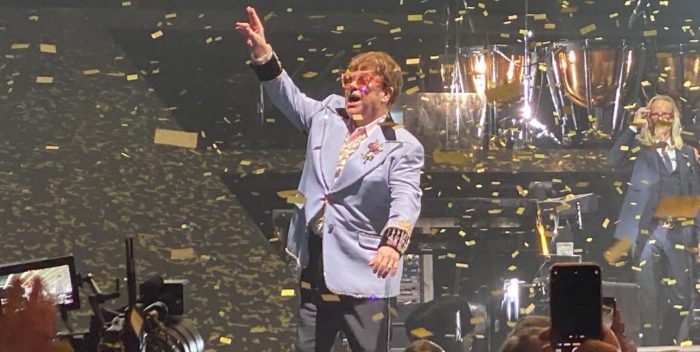 Elton John said he wanted to wrap up his touring life so he could spend time with his kids. After 50 years, he had every right to do it. He was 72 years old.

Then came the pandemic, and various illnesses. During the time off, he managed to fit in an actual number 1 hit with Dua Lipa, “Cold Heart,” and a new hip. But you know, he’s always been very hip!

So last night after many delays the “Farewell Yellow Brick Road” tour resumed at a very sold out Madison Square Garden to a vaccinated and maskless crowd wired with energy that sang along to every song, stood throughout the show.

“Farewell Yellow Brick Road” is two and a half hours with no breaks whatsoever. A couple of songs in, Elton, who runs a legendary band but is essentially the whole show, looked like a prize fighter who might need a second wind. He leaned against piano, took a breath and wiped his brow. But he recovered instantly as the mostly middle aged crowd cheered. After all, we’ve been with him for five or six decades. It’s no time to stop now.

I was warned that maybe the voice wasn’t there, but I heard no sign of wear or tear. Even if he’s masking some infelicities, Elton John’s trademark sound is distinct and intact. On songs like “Candle in the Wind” and “Don’t Let the Sun Go Down On Me,” which are demanding, he holds his own more than ably. If you grew up with that voice, and know it, you’re not disappointed. “Someone Saved My Life Tonight” is more moving than ever. In “Levon” and “Tiny Dancer,” the Southern soul tinges Elton picked up from Leon Russell– who he still lovingly credits in one of his midsong speeches– are kind of luscious.

But put the singing aside. Watching Elton John pound out 20 or so rock songs — no matter how melodic or gorgeously arrannged–  over two a half hours is kind of amazing. How he doesn’t expire is something. I’ve been watching him at Madison Square Garden since the 70s and his energy and precision haven’t flagged at all. Yes, he used to dress as the Statue of Liberty and hit the keys hanging upside down, neither of which he does anymore. But that’s for the better. There’s a reason the live video focuses on his hands running up and down the keyboard. He’s really a virtuoso who echoes everyone from Little Richard to Van Cliburn and Liberace. And it’s not pedestrian piano playing. He’s getting colors out of that instrument. When he finishes up the song proper and launches into these amazing runs on “Border Song” or “Burn Down the Mission,” the band can barely keep up with him.

Apart from the Leon Russell nod there were two others of note last night. One was to Aretha Franklin, who covered his “Border Song” and shared a birthday with Elton. He hasn’t gotten over her final performance, at his AIDS Foundation gala, when Franklin was near death and looked skeletal. She rose to the occasion and put on a show that I was lucky to see also. No one has ever forgotten it. And before “Don’t Let the Sun,” Elton gave a memorial shoutout to Procol Harum’s Gary Brooker, who died yesterday from cancer. It’s not lost on him that Brooker was his contemporary.

It’s a long road from here to November 19th and the final show at Dodgers Stadium. Can he do it? He will, by hook or crook. Elton has his insanely talented band including Nigel Olsson, Davey Johnstone, and Ray Cooper, all of whom go back with him to the 70s. (Besides the E Street Band, what other group is like this?) Even with the band you can’t escape the fact that this is a one man operation. When you talk about Elton John it’s in the same breath as the Beatles, the Stones, the Eagles– groups! Not individuals. He’s a phenomenon. See him now. Tonight is his last show at Elton’s self-proclaimed favorite venue, Madison Square Garden.

PS I will go to my grave with one regret: I stupidly said in November 1974, better go to the first show at MSG. I missed the John Lennon show. Every time it’s mentioned I am “triggered.” But I was 17, and who knew? Also, my mother would never have allowed us to miss Thanksgiving dinner.