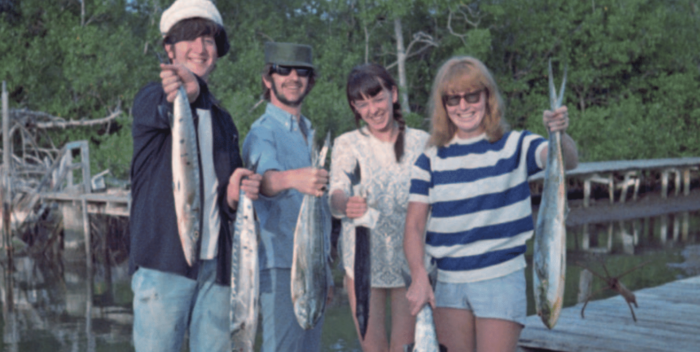 Ringo Starr– or maybe his kids– they’re sitting on what could be the all time collector’s item, an NFT perhaps worth zillions.

Ringo writes in his excellent memoir-photo book, “Lifted,” that he commissioned a one of a kind recording from Frank Sinatra for his wife, Maureen, back in the 60s. Frank recorded “Maureen is a Champ” with special lyrics to “The Lady Is a Tramp.” I never knew this, and I doubt many Beatles or Sinatra fans are aware of its existence.

Listen to it all the way through. “She married Ringo/She could have had Paul.” LOL. There’s a line about meditation, too. And a sweet coda from Frank at the end. There’s also a shout out to Beatles PR man Peter Brown– which would mean he had two, the other in “The Ballad of John and Yoko.” Cool!

Ringo’s comments (as told to David Wild) are below followed by the song from YouTube, where it has 43,000 plays. The photo goes with it from “Lifted.”

Even though Ringo and Maureen divorced they remained close until her tragic death from cancer in 1994.

“Lifted” can only be purchased via Julien’s Auctions in Los Angeles. All proceeds go to charity.

Looking back – now that I’m the last one in this photograph who’s left – it’s hard to say if John and I were such catches back then. These great ladies loved us early on and kept cheering us on. Maureen was literally one of those young girls cheering us on at the Cavern Club and she was still there cheering us on at our famous last live appearance on the roof at Apple. When we finished “Get Back” up on the roof, you can clearly hear Paul say, “Thanks Mo,” before John says his famous line and passing the audition. When Mo passed in 1994, Paul wrote a beautiful song called “Little Willow” in honor of Maureen, basically saying, “Thanks Mo” again.

Maureen loved the music of Frank Sinatra, so for her birthday in 1968, I asked Frank Sinatra himself to record a special version of a song for her. You can still find it online – Ol’ Blue Eyes singing “The Lady Is A Tramp” for my first wife with great new lyrics. It’s called “Maureen Is A Champ.” And Frank sounds great singing, “She married Ringo/And she could have had Paul/ That’s why the lady is a champ.”