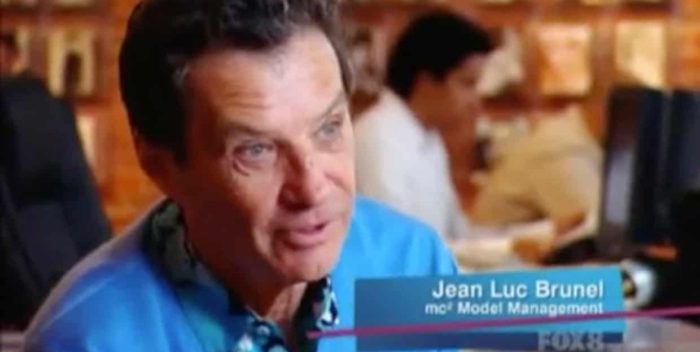 It’s the end of a long story. I first wrote about him in the New York Observer in 1991. He had already then been profiled by Diane Sawyer on “60 Minutes.” I wrote about him because he was the silent partner in a new modeling agency. He was already then accused of grooming and sleeping with underage models.

Flash forward to the present: unchecked despite numerous subsequent stories in the media, Brunel hooked with Jeffrey Epstein and Ghislaine Maxwell in their procurement of girls around the world. He wound up in a French prison, accused of rape. One of his victims was Virginia Roberts aka Virginia Guiffre, who just settled her case against Prince Andrew for $14 million.

And now Brunel is dead, likely a suicide. But if murdered, there are so many candidates.

Like Epstein, Brunel was found hanging in his cell. It seems like the right ending for him.

According to reports, Giuffre claimed in August 2019 court documents that Brunel was one of the men Maxwell had directed her to have sex with while still a teenager.  Guiffre claimed in a 2015 affidavit that Epstein bragged he had “slept with over 1,000 of Brunel’s girls.”

But I knew about Brunel three decades ago. In The New York Observer I reported that he was the silent partner in Next Models, a new company formed by New York model execs Faith Kates and Joel Wilkenfeld. They denied the association, but a number of people connected to them confirmed it.

When I was reporting the story in ’91 about Kates and Brunel, I was pointed to the “60 Minutes” story. Since there was no YouTube then, I called Esther Kartiganer, the famous editorial director of the newsmagazine. She invited me up to West 57th St to watch the 1988 segment on a monitor in her office.

Brunel was often accused in Page Six of something that was quaintly called “modelizing” back in the day. He was in his 40s then, and was among a group of men who owned model agencies and were seen nightly in clubs with very tall, very young looking girls. Donald Trump was so excited by the idea, he briefly had his own modeling agency.

No one will miss Jean Luc Brunel. He’s better off dead. although it’s a shame he will never be tried for his crimes.