HBO’s “The Gilded Age,” the Americanization of “Downton Abbey,” is struggling to find an audience and a rhythm.

Monday night’s second episode scored just 542,000 viewers, down about 40,000 from the previous week. Still, it was better than “Euphoria” or “Billions” this past week.

This show was created for American TV and was supposed to be on NBC. It was moved to HBO because the NBC exec who bought it there left the network for HBO. Still, it looks like an NBC show. The production has no nuance. It’s very…bright and sharp. And it’s set in the 1880s. The lighting makes it look like the 1900s. The sets are convincing enough, but there’s a lot of green screen. When actors stand in front of obvious laid -in video backgrounds, it’s very obvious. Isn’t there a lot of old New York to shoot in?

The acting is up and down, and that’s because the characters are largely retreads of “Downton” people. Christine Baranski is playing Maggie Smith, for example. There’s an upstairs and a downstairs. Baranski’s haughty Agnes van Rhijn is snobby and demeaning. Still I kind of like her. Kristine Nielsen, a Broadway giant whom I adore, is playing Mrs. Patmore the head of the kitchen. (She even looks like her.) And so on. You could draw lines between the two shows and find all the comparisons. 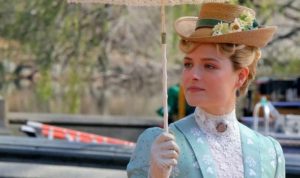 Meryl Streep has three daughters in real life. Mamie and Grace Gummer are already well established and incredibly talented. But now comes the youngest, Louisa Jacobson (using a family name) as the bright eyed ingenue Marian who comes to the van Rhijn mansion from the mid west to seek her fortune. Marian is right out Edith Wharton, Jane Austen, and Henry James. Jacobson is so at ease, she’s an instant star. She has the family gene. I promise I won’t always call her “Meryl Streep’s daughter” but this is her launch. If “The Gilded Age” ends with these 10 episodes, Jacobson still has a bright future.

There are some other highlights. Cynthia Nixon is lovely as Baranski’s naive, bumbling sister Ada. Her performance is a relief compared to this new season of “Sex and the City.” Morgan Spector is growing on me as George Russell, the interloper robber baron who wants to build a new train station in Manhattan. He’s very JR Ewing. Denée Ayana Benton is a real find as Peggy Scott, the young Black woman who is befriended by Marian and comes to live and work in the van Rhijn house. (She also gets Audra McDonald as her mom– four stars.)

Much has been made of all the Broadway stars coming and going in this show. Kelli O’Hara, Patrick Page, Donna Murphy, and Katie Finneran are among the others, as well as Debra Monk. So it’s a good employment center for New York actors. We’re always in favor of that.

I’m watching “The Gilded Age” in real time, not off the press site. So we’ll keep watching and hoping things keep getting better.