If things weren’t bad in the print world, now they have reached the point of despair.

Barry Diller, media mogul, bought a bunch of former Time Life magazines from Meredith Publications. Now he’s closing six of them including Entertainment Weekly and In Style. He’s keeping the digital versions, the websites, but the magazines will end their runs in April. It’s notable that Diller’s company, IAC, also owns the Daily Beast website, but they have not reported this story. The Wall Street Journal broke the news.

At Conde Nast, things are just as desperate. With flagging circulation, Anna Wintour has stooped low with the new issue of Vogue. She’s put Kim Kardashian on the cover and a big splashy photo shoot inside. The story, as it were, is a lovely puff piece. Kim probably thinks she has a shot at the vacant Supreme Court seat now.

In Style won’t be missed. They routinely paid subjects so they could photograph their homes. I’m surprised that Diller didn’t leverage the brand into a home furnishings show on cable. They seem to be thriving on TLC and other outlets.

Entertainment Weekly, the magazine, will be much missed and mourned. I wrote for them 30 years ago and it was a real generator of talent and excitement. So many of the original staff have gone on to become authorities in entertainment journalism, that’s the great result of all that work.

The sad part of the Diller decision is the loss of 200 jobs. That really hurts. And eventually I’m sure EW will be moved into People magazine’s website. What’s happened to People is mind boggling. Once the bible of pop entertainment news, now it’s like a bad version of the AARP Magazine. This week Lionel Richie is on the cover. We love Lionel, but he’s not exactly contemporary. Being a judge on “American Idol” doesn’t require a People cover. They also seem to make a lot of mistakes, and omit facts from stories either from ignorance or some unknown agenda.

As for Vogue, Kim Kardashian, she’s been there before, and it hasn’t helped the situation. Vogue is still losing circulation in print and digital. And they always confront the fate of EW, In Style, and all the other magazines that have closed.

PS Here’s a great cover of EW. I interviewed Ellen Barkin for the Blake Edwards movie, “Switch.” And I wrote about all the recurring characters on “Dallas” as the  show went off the air after 14 years. 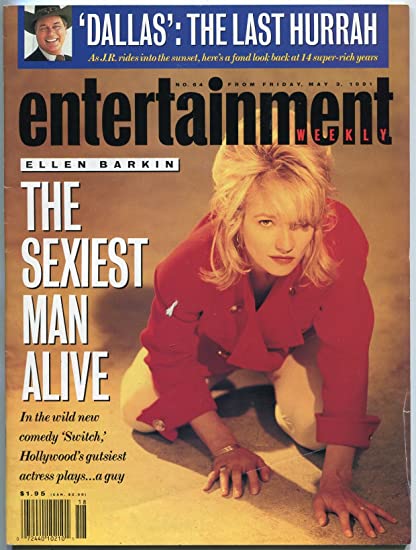