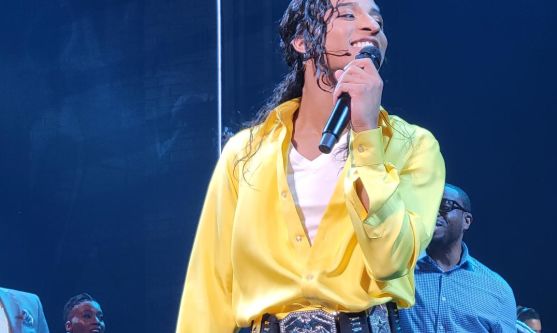 The Michael Jackson musical, “MJ,” opened on Broadway last night to standing ovations and cheering during the show, an extremely enthusiastic, and cranky critics looking for a reason to pan it.

Top to bottom, “MJ” is a high end jukebox musical with terrific songs, dancing, performers who deserve better than to be dismissed for snark.

The show covers Jackson’s life from the Jackson 5 through the 1992 rehearsals for his Dangerous tour. It stops there because after that Michael’s life became overwhelmed with accusations of child molestation, pay offs and settlements, general weirdness, and a tragic end. Do you want to see that in a musical? Or do you want to see his insanely good, still very popular hits woven into a story? This is not “Sweeney Todd” and it doesn’t have to be.

If Michael were alive, of course, he couldn’t get away with this. As a journalist who covered him, I’d be all over it. But Michael is dead.  His story is over. He was never convicted of anything. He was acquitted in 2005 of child molestation and kidnapping. So he leaves a clean record. He became incredibly eccentric, but this photo shows him working and still regimented as an artists. And the hits, and the famous dancing.

Director Christopher Wheeldon and dramatist Lynn Nottage have created a very entertaining piece of theater that hints at Michael’s problems and issues, but concentrates on the music. The cast, led by Myles Frost, is terrific. Frost has never appeared before on Broadway, but he swoops and sways like Michael at the peak of his career. He’s got the falsetto and middle range og his singing down, too. His performance I’d compare to Adrienne Warren’s Tony Award turn as Tina Turner. Frost is fully committed and it shows.

Derek McLane’s sets are superb. “MJ” is set in a rehearsal hall, but there are set pieces –like the Walking Dead of “Thriller– that are spine tingling. “Bad,” “Beat It,” “Billie Jean” are all there, as are songs like “Human Nature” that come alive on stage. And all this work leads up to a stunning finale of “Man in the Mirror.”

A few shout outs– to Quentin Earl Darlington, who plays Joseph Jackson as well as “Rob,” director of Michael’s tour, and a pretty convincing chief Zombie. And to Ayana George, who I cited in a previous column, with a spectacular voice. She plays Katherine Jackson and Tavon Olds-Sample as teenage to young 20s Michael.

“MJ” is a photograph, a moment in time. If you want a drama, with a courtroom setting, that’s a different show. If you want that, read all my old columns. I could tell you a different story, but it’s not this story. This is the story of music everyone still loves, especially well constructed. Celebrate this talent on Broadway.