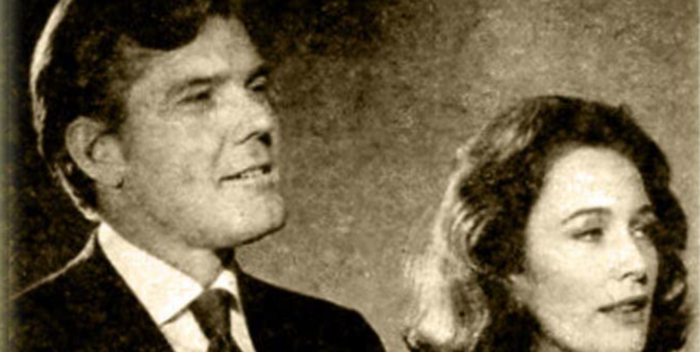 Back in the days when there were just five TV channels– yes, just five — afternoon soap operas had millions and millions of viewers.

Donald May, the actor who played dashing Adam Drake on “The Edge of Night,” has died a few weeks short of his 95th birthday. He was a huge daytime star. He and Maeve McGuire played Adam and Nicole, the show’s hero and heroine. Back in the 70s I was in my dorm room when I heard a girl down the hall let out a shriek. I ran down the hall. She said, “Nicole is alive!” The actress had taken a year off, now her character was back and reunited with her romantic lead.

Donald May played Adam for years, was eventually killed off permanently when “Edge of Night” switched from CBS to ABC. (May probably wanted $10 more a week. P&G was no fun to work for.) He went on to play other characters on the New York soaps, particularly owned by Proctor and Gamble. But Adam Drake was his signature role. He was a lawyer and a crime solver. When McGuire took that time off, the show introduced Dixie Carter as a character to replace her in scenes with May. Carter was such a hit she went off to “Designing Women.” But May and McGuire were the real stars.

And that’s what it was like when there were five channels, no cable, no streaming, no wifi. And somehow we lived.