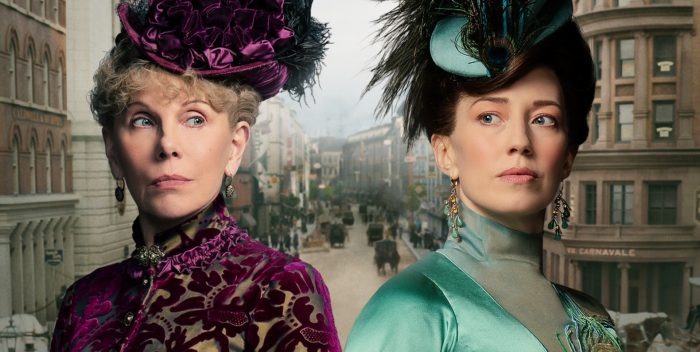 HBO’s “The Gilded Age,” the poor man’s “Downton Abbey,” arrived with 463,000 viewers Monday night. That’s a lot more than “Euphoria” got on Sunday night, or “Billions” on Showtime.

(HBO sends out numbers that include HBO Max but they are not Nielsen monitored. For example, the cabler says “Euphoria” had 3.6 million viewers Sunday night on the streaming platform.)

Julian Fellowes, who gave us “Downton Abbey,” is the man behind “The Gilded Age” but the two shows cannot be mentioned in the same breath. “TGA” is the clunky, crass American cousin, saddled with bad acting, poor production values, and dialogue that wouldn’t make it onto “General Hospital.”

It’s hard to say what went wrong. “TGA” was meant for NBC and looks like it. The lighting and film stock are so sharp you wouldn’t be surprised if someone from the hospital drama “New Amsterdam” walked in. Plus the green screen and matte-ing are like something from a 1930s movie: fake, fake, fake. No attempt was made to appear “real” in the delivery of old New York.

As the premiere episode dragged on, I had more and more complaints. Believe me, this wasn’t fun. You wanted to it be good. Christine Baranski is fun but she’s playing Maggie Smith from “Downton.” Cynthia Nixon has no idea what to do so she’s playing the nutty spinster aunt. Morgan Spector was in a different series altogether. Carrie Coons’s cadences were enough to send cats running up walls. (This show needs dialect coaches in the worst way.) And everyone seemed to have strange eyebrows.

The only successes, I thought, were Audra McDonald and the young woman playing her daughter, Denée Benton. They actually had a rhythm and rapport.

Well, there’s more “Gilded Age,” I guess, nine more episodes that have been on the shelf for some time. I doubt there will be more. This is like “Vinyl,” a misbegotten adventure best forgotten. Also in light of “Bridgerton,” this series is already a mistake.