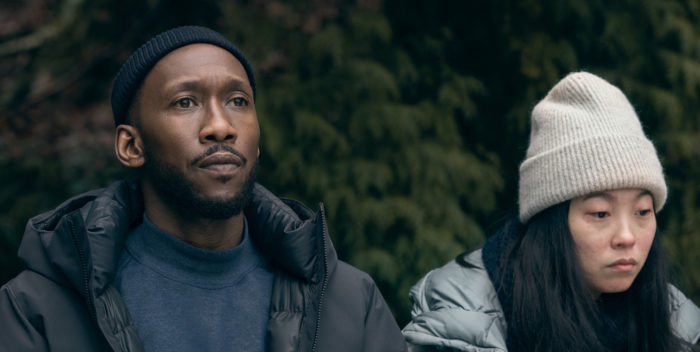 Oscar voting starts Thursday and one performance that should not be overlooked is Mahershala Ali’s nuanced turn playing two identical characters in the moody and melancholic Apple TV Plus’s “Swan Song.”

Benjamin Cleary wrote and directed this taut, emotionally gripping sci-fi drama. Ali plays Cameron, an artist in the near future who has terminal cancer. He has kept it a secret from his loving wife (Naomie Harris) and young son Cory (Dax Rey.) Enter Dr. Jo Scott, played with chilling perfection by Glenn Close, who has the cure/answer, but not really. Dr. Scott can recreate Cameron’s body and brain and upload his memories, even the darkest, most troubling ones, buried deep in his subconscious into a new identical body named Jack (also played by Ali.) Cameron has a short time to live and a short time to give his life over to Jack, and Jack will only know he’s Jack and not Cameron for a brief time as well.

“Swan Song” could be complicated if not for the clear, understated and thrilling performance of Ali. He is consistently heartbreaking and luminous on screen, one of the most accomplished actors working today. Awkwafina also deserves a shout out as a fellow dying patient who turned her life over to a double. Awards tastemaker Colleen Camp is making sure that this film is being giving the respect it should, she recently hosted a Q & A moderated by Barry Jenkins with Ali and Harris, and she’s right once again. Ali’s internal struggle is what makes his powerhouse performance in “Swan Song” worthy of an Oscar nod.