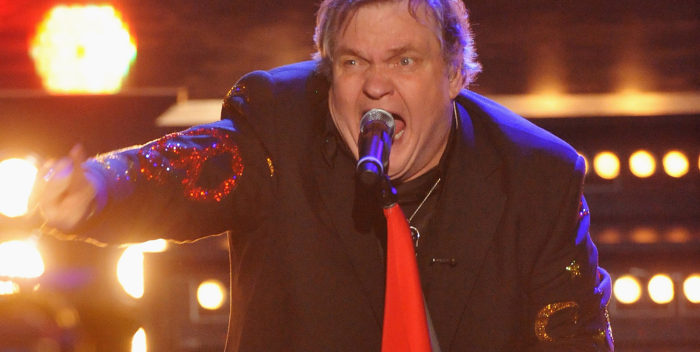 The iTunes charts are serving Meat Loaf this afternoon.

Following the singer’s death from what looks like COVID (and maybe because he wasn’t vaxxed, which is really stupid), Meat Loaf has taken over the charts.

The top four singles are all from the single, plus number 6, and then at least 11 others. “You Took the Words Right Out of Mouth,” indeed.

These are as much a tribute to Meat Loaf as they are to Jim Steinman and Steve Popovich, who respectively wrote the songs and released the albums originally.

Popovich has to sue Columbia Records and then Sony a couple of times before he died to get money that was due to them. It was never an easy relationship.

You know the line, “Revenge is a dish best served cold.” Last week, Steve Popovich got his revenge. And the dish was Meat Loaf.

Popovich’s Cleveland International Records was the original home to rock singer Meat Loaf and his late ’70s classic album “Bat Out of Hell.” Popovich licensed the album to Epic Records and it sold 30 million copies worldwide.

But over the years, as Epic was bought by Sony, the label dropped Popovich’s logo from re-pressings of the CD. At one point Sony agreed again to put the Cleveland logo on the Meat Loaf album, but didn’t follow through.

On Friday, a federal court in Cleveland ruled that Sony now owes Popovich $5 million for not complying with previous agreements. You might think Sony would have learned a lesson from a 1998 lawsuit with Cleveland International. In that one, they were ordered to pay $6.8 million in back royalties.

And so it goes with Sony/Columbia/Epic and other record companies. New York State Attorney General Eliot Spitzer is already looking into other unusual business practices at record labels. He has subpoenaed Sony’s Donnie Ienner and other executives to explain why royalties aren’t paid and other mysteries that have plagued people in the business for years.

One thing Spitzer might look into is the long running federal lawsuit against AFTRA Health and Retirement Funds — a separate entity from the mothership American Federation of Television and Radio Artists — over lack of funds for recording artists.

The funds were supposed to come from reported royalties from record companies over the last 40 or so years. It’s a Pandora’s box, but one well worth opening.

I told you last May that Steve Popovich — the former Sony Music exec who brought the singer Meat Loaf and his megahit “Bat Out of Hell” album to the label in 1977 — won a $5 million lawsuit against the record company.

The issue was that Sony had settled with Popovich in 1998 and agreed to put the logo of his record company, Cleveland International, on all the Sony Meat Loaf CDs.

You’d think they’d just pay it, wouldn’t you? And put the damn logo on the CDs. But nothing is simple in the record business, not when you’re dealing with egos.

Now Judge Solomon Oliver Jr.. of Ohio’s Northern District has issued a 37-page ruling that doesn’t cast Sony in the best light but helps Popovich in his quest for vindication. Oliver denied Sony’s motion for a new trial.

At the same time, he stopped Popovich from collecting any more money from Sony than that which the jury had already decided. Popovich wanted interest on the $5 million from 1998; the judge said he could only have it from last May.

At this point, though, Sony — at least from Judge Oliver’s perspective — would be smart to just wrap this up. The legal fees must be staggering.

Popovich is sanguine about the latest episode. Meat Loaf‘s “Bat Out of Hell” album has had three lives, he points out: on record, on CD and again after Meat Loaf’s recent revival with a new album.

Popovich says, “I lived up to my word; I signed an 82-page contract with CBS, now Sony/BMG, in 1977, after being an employee for 20 years, that gave them ownership of one of the biggest albums in the history of the music business.

“To date, ‘Bat Out of Hell’ has sold over 40 million and at one time was listed in the top five albums ever released. In return, I was to receive a royalty and my Cleveland International Records logo on all Meat Loaf master recordings. I had to sue to get them to do either. I still don’t know when, or if, I will receive the settlement in this case. In the meantime they hope you die or go broke so they can continue to rob your kids and grandkids.”