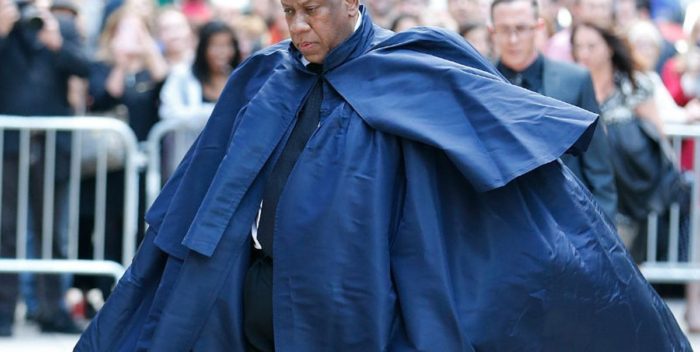 Talley was a gentle giant know for wearing caftans and guiding the fashion sense at Conde Nast Publications for more than 30 years. When he was summarily dumped by Anna Wintour, he sought his revenge by writing a witty erudite book about life at Vogue, among other things. He rose above his abrupt dismissal and became even more famous.

TMZ is also reporting that Andre died at White Plains Hospital. There’s no cause of death but I see that ALT hasn’t been on social media for a year.

I first met Andre with Paloma Picasso in the mid 80s. When I first saw him, I have to say, I was dazed. Who was this person? Decked out to the nines and then some, Andre acted like a Royal Prince from some amazing country– maybe Wakanda, but we didn’t know about that in 1986. Paloma, whose book I was promoting, introduced me. She was a little bit in awe of him, too, but he treated her with utter deference.

For years after that I saw him on the circuit, we’d wave or talk, nothing deep. He was first at Vanity Fair, I think, but morphed over to Vogue in time. I used to think, How can he stand her? And in time, we learned that he couldn’t. Anna, who got rid of Grace Coddington after “The September Issue” movie made Grace a star, was lining up Andre next for execution.

God bless him, he didn’t take it lying down. He went on a rampage, wrote a book, starred in a documentary. Of late he was involved in a massive and taxing eviction proceeding in Westchester. Right before the pandemic started in February 2020 Andre was at an event, he was on a panel, we had a long talk. He remembered that day with Paloma and we laughed about all the people we knew including Anna.

What a shame he didn’t get a chance to go on. He was one of a kind. His memory will outlast his enemies’.