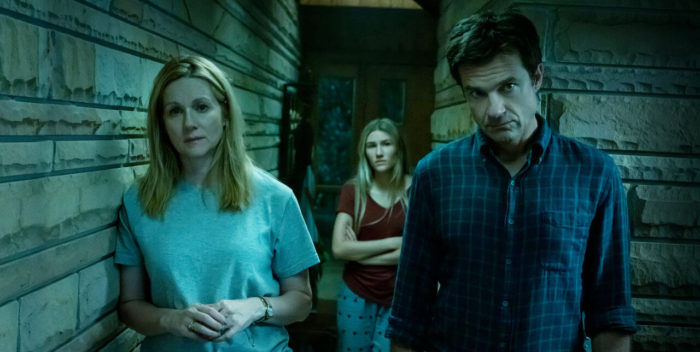 Now we get a fourth and final season, split in two. Part 1 begins this weekend with seven episodes you can binge watch on Netflix beginning Friday, January 21st. And you will.

I have two TV analogies for “Ozark.” First, it would be as if Ward and June on “Leave it to Beaver” suddenly became lawless and openly carried machine guns. Second, there’s a bit of “Lost in Space” here, if only the main family, the Byrdes, could find their way home.

To recap: when we last saw Marty and Wendy Byrde (Jason Bateman and Laura Linney) their mob attorney, Helen, played by the incandescent Janet McTeer, had been brutally murdered. The Byrdes were at a crossroads with their Mexican drug king pin and their pregnant FBI agent. Their kids, now 17 and 14, were wise to their money laundering operation out of a crap casino in the Ozarks. Wendy’s brother, Ben, played by the incendiary Tom Pelphrey, was dead because they killed and incinerated him like Toby toward the end of “Sweeney Todd.” Ruth, Tom’s girlfriend, and the Byrds’ right hand girl, in the form of luminous Julia Garner, had had it with them, which wasn’t good.

How were the creators of this show —  Bill Dubuque and Mark Williams —  going to top all this and bring it to an end? And why bring it to an end? I feel like I could watch Marty Byrde snivel his way around the Ozarks and Mexican cartels for years, that I could go on Wendy Byrde’s Lady Macbeth rollercoaster even longer. The Byrdes went from being a nice yuppie couple in Chicago to conscious-less criminals, albeit with good intentions, in a very short time. They’ve talked their way out of nearly dying so many times you need a scorecard. And Ruth, my god, Ruth, is so magnificent in her rise from dirt poor nothing to Goneril on speed, you can never take your eyes off of her.

Yes, there is a lot going on here. A lot of plot has to be stuffed into Season 4.1 first that ties up the consequences of Season 3, Then we have the opening of Season 4 which offers a cliffhanger prologue to something that happens in 4.2. So we have some information. But just as quickly we jump back to those consequences. Brother Ben is dead, but officially only “missing.” (Some people, including his father– played by a much too young looking Richard Thomas– would like to know where he is.) Helen is dead, also just “missing,”  and a dogged private eye has come to town to find her or her body. Plus, the cartel is falling apart. The good news is the actress who played the FBI agent has had her baby and lost all that weight. She’s like a new pin, and her character is trying bring all these criminals to justice.

The six episodes unfurl with a furor. You will have to just sit down and watch them all at once, as I did, because you can’t freaking stop. Laura Linney has refined Wendy now to the point where she scared me, and I know her. She could compete with any of this year’s female Oscar nominees and win if formats weren’t an issue. Wendy is brutal. Linney’s face runs colors of a litmus test as she plots, connives, twists, and turns through a web of lies and deceit that would JR Ewing blush. The Mexican drug lord and his nephew, psychotics by trade, have nothing on her. (Wait til you see her showdown with rival psychopath, Darlene, the pungent Lisa Emery.)

I am all there for Julia Garner. As I wrote before, I’ve never seen any actor so present in a role. She’s there but it’s 120 percent with the lights blazing. I’m just now watching her in “Inventing Anna” (coming to Netflix in February) and she is a force to be reckoned with. I’d like to have Julia Garner on a loop drawling the name, “Darlene” in many different Hillbilly intonations. By the time Ruth gets to Episode 4.7 you should pour a drink. Indeed, that 7th episode– you’ll have been watching this shit for six hours already–will leave you spent.

And Jason Bateman? He’s the hard core at the center of this amorphous thing. You think Marty is a marshmallow who can’t keep up with Wendy or his enemies. Ruth thinks she’s got him all figured out. But Marty is the key to this gang’s success if there’s going to be one. I don’t know how it will work out. Will the Byrds end up like the Sopranos in the coffee shop? Or go back to Chicago and laugh about their adventures in the Ozarks? I am actually frightened for them. But this is an instant classic TV show and I just hope they get the ending right so we don’t have to endure one of these post-series movies. Please God the Byrds get a real grand operatic finish, and Emmys galore next September.

Really, “Ozark” is perfect. All it’s missing is theme music.