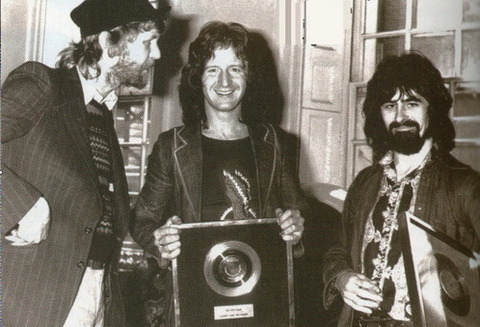 1972– like 1971, we are in a 50th anniversary nirvana right now of great, timeless music. Half a century ago this week, Don McLean’s “American Pie” was number 1, and there was a torrent of perfection on AM radio with Al Green, the Spinners, Sly and the Family Stone, and so many more.

In rock. it was actual “Perfection” as that was a track on the now-classic Badfinger album, “Straight Up.” This is one my desert island discs, a record that grows and grows with time. Produced by George Harrison and, separately, Todd Rundgren, “Straight Up” had two hit singles that still reverberate to this day, “Day After Day” (slide guitar by Harrison, overlaid piano by Leon Russell), and “Baby Blue,” produced by Rundgren and made famous in recent years as the concluding song from “Breaking Bad.”

The album was a minor hit in ’72, the singles were top 20. Badfinger, of course, was from the Beatles’ Apple label. They’d had hits with the Paul McCartney composed “Come and Get It,” and their own song, “No Matter What.” But the “Straight Up” album put them over the top.

Coincidentally, a track from an earlier Badinger album was called “Without You.” Harry Nilsson heard it and wanted to record for his Richard Perry produced smash hit album, “Nilsson Schmilsson.” This was all happening at the same time. Perry’s take on “Without You” featured Gary Wright on piano. Wright, like a lot of the musicians Perry brought in, came from George Harrison’s “All Things Must Pass” sessions, like Jim Keltner and Klaus Voorman. Wright would have a pair of big hits in 1976, “Love is Alive,” and “Dream Weaver.”

The Perry version of “Without You” is drastically different than Badfinger’s. It’s what I think of as one of the very singles of all time for its drama, richness, and texture. When you hear it now, it’s spine tingling. Mariah Carey understood that when she recorded her own version years later. She should have sent Perry flowers, if not a check.

Perry, who writes about all this in book, Cloud Nine, had a smash with “Nilsson Schmilsson” and produced an equally good sequel, “Son of Schilmisson.” He also took what he learned and produced two more seminal works over the course of 1972– Carly Simon’s “No Secrets,” with “You’re So Vain,” and Ringo Starr’s “Ringo” with three other Beatles and all these musicians.

This was a confluences of events in rock history. The result is that 50 years later, all these records remain vibrant and alive. It was a moment when fireflies were being caught in bottles.