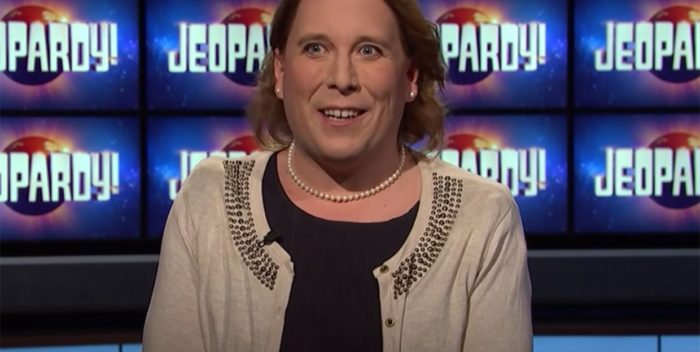 “Jeopardy” is no longer in ratings jeopardy. And it’s all thanks to Amy Schneider.

Schneider  won her 32nd straight game on Thursday night, and she is now tied for third place with James Holzhauer for the number of consecutive games won.

Schneider’s first game was on November 17. She’s won $1,101,600 and is the highest earning female contestant in “Jeopardy!” history. Schneider is now $417,001 away from overtaking Matt Amodio’s third-place spot for highest regular season play winnings, and only six games away from tying Amodio’s second-place streak of 38 games. But she’s far away from beating show host Ken Jennings’ record of $2,520,700 over 74 games.

Schneider, by the way, is the first transgender person to play or win “Jeopardy!”

On Twitter this fall, Schneider wrote: “The fact is, I don’t actually think about being trans all that often, and so when appearing on national television, I wanted to represent that part of my identity accurately: as important, but also relatively minor. But I also didn’t want it to seem as if it was some kind of shameful secret. While it’s gratifying to know that people didn’t necessarily know I was trans until they read about it, I do want people to know that aspect of me. I think being trans is really cool!”