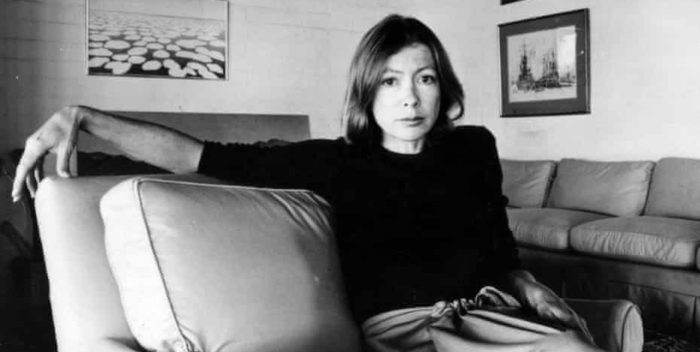 The great writer, journalist, novelist, observer of the scene, definer of the gestalt, Joan Didion has died at the age of 87. The cause given is Parkinson’s Disease but Joan had been frail for some time. The unimaginable losses of her husband, the writer John Gregory Dunne, and their adult daughter, Quintana Roo, resulted in her famed book, “The Year of Magical Thinking.” Even in her grief, Didion added an expression to the language.

She leaves her nephew, Griffin, and his family. Griffin is the actor and director son of Joan’s late brother in law Dominick Dunne. I had the honor of  knowing Dominick, John, and John in my lifetime, and they were three magnificently talented, ingratiating people who made life in literary New York and Los Angeles that much more rewarding. Rest in peace to all of them, and condolences to Griffin et al.

Here is a link to her Times obit.