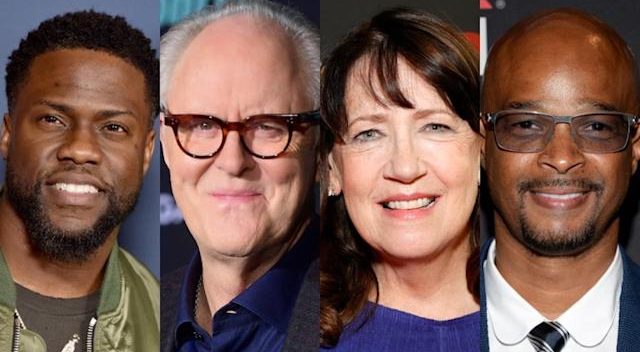 Jimmy Kimmel had this idea to reboot Norman Lear’s old shows a few years ago, and they did it brilliantly with “All in the Family” and “The Jeffersons.” (Marisa Tomei as Edith Bunker was brilliant.) They called it “Live in Front of a Studio Audience” and it was just that, live.

They came back  tonight, live again, with “Facts of Life,” and “Diff’rent Strokes,” lesser shows certainly but like those others, tied together like adjoining rooms. Someone had the bright idea to cast adults as the kids in both shows and it worked.

The headline is that Ann Dowd, who found success a little late, just killed as Mrs. Garrett aka the actress Charlotte Rae. She was note perfect, as was the biggest star of the evening, John Lithgow, as Mr. Drummond. Lithgow actually shared a scene with Snoop Dogg. Now our lives are complete. John Lithgow is a national treasure. Dowd’s wig should win a prize. She wore it proudly, like a crown.

In “Facts” we had Jennifer Aniston, Gabrielle Union, Allison Tolman, and the impeccable Kathryn Hahn as Blair, Tootie, Natalie and Jo. Special appearances by Jason Bateman, Will Arnett, and the much missed-as-an-actor Jon Stewart, who should die his hair dark again immediately. The script isn’t sophisticated but it fell together because of all these talented people. Jennifer Aniston, my hat is off to you. When she said “I’ll be there for you,” at the end it was a lovely Easter egg.

“Diff’rent Strokes” worked almost as well, hindered by a creaky script and no one playing the late Dana Plato. Snoop Dogg was the surprise, with Damon Wayans and Kevin Hart playing the kids. (Kevin Hart is really small as it turns out, shorter than Ann Dowd.) Everyone was fine, but it was Lithgow and Dowd who really made this part. And the last line, from Hart, about Snoop’s character smelling like weed, was another happy Easter egg.

In between the producers of this thing gave us very clever commercials, sort of meta parodies and new promos for ABC shows made to look like they were from 1982. Jennifer Beals and Alfonso Ribiero deserve a lot of credit. I loved the Kraft singles.

But where was Nancy McKeon of “Facts of Life”? She was the only living original cast member who didn’t show up. Even worse, no one mentioned her. But Kimmel and crew get mucho kudos, and Norman Lear, almost 100 years old, should be on Mount Rushmore. Norman, we’ve got to have “Maude” next. I’m starting to think Cate Blanchett is the way to go.

PS No one really missed any lines, either. There were a couple of funky moments, but pretty good for people who don’t perform live regularly.