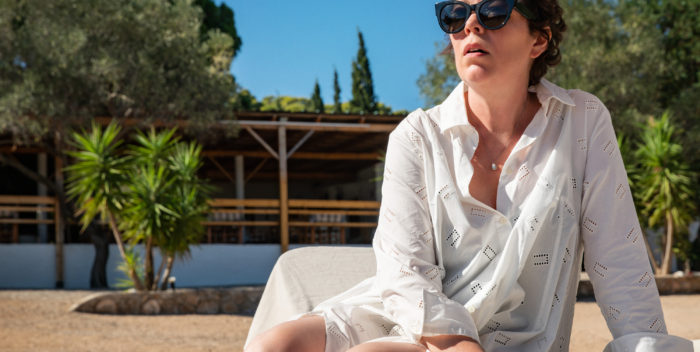 Maggie Gyllenhaal has long been known as one of our finest actresses and now she adds ‘Director’ and ‘Screenwriter’ to that with her hugely impressive, dynamic debut, Netflix’s “The Lost Daughter” based on Elena Ferrante’s best-selling book of the same name.

Gyllenhaal’s debut is a sophisticated, thoughtful adaptation which tackles the mostly taboo subject of motherhood not being all that natural or fulfilling for some women and the judgement, from self and society, that stems from that.

Olivia Colman gives, once again, a master class of an acting performance. She plays Leda, a middle- aged introverted language professor who decades earlier walked out of her marriage and her young daughters.

On a working holiday in a small beach town in Greece, Leda — reading at the beach — becomes rudely interrupted by a loud and large shady family from Queens, New York who are vacationing at their family home.  She’s intrigued and then fascinated by a young woman, Nina, part of that rowdy clan, as Nina struggles to keep her own toddler daughter calm, happy and occupied.  When the little girl wanders away Leda helps find her, and the plot thickens from there.

Nina is played by Dakota Johnson who gives an enigmatic, thoughtful performance. Leda via Nina, is reminded her of her own tumultuous early life decades prior with her then two young daughters Bianca and Martha.  Colman makes us understand Leda, without condemning her and even empathizing with her. Leda chooses self-love and liberation from gender and society’s ‘norms.’

Gyllenhaal doesn’t sugar coat; she stays in the uncomfortable moments which are truthful and painful.  How Colman plays her is uncanny; being so present and so contradictory and complex, selfish, loving, messy, a woman struggling to be true to herself and to her nature.  Jesse Buckley beautifully plays young Leda, with all her contradictions of young motherhood.  Because of Gyllenhaal’s talents in the writing and direction,  Buckley and Colman’s performances weave perfectly together.  Dagmara Dominczyk, Ed Harris, Peter Sarsgaard and Paul Mescal are all terrific in their supporting roles.

In her directing debut, Gyllenhaal has created a foreboding film that’s gutsy and detailed with artistry in every lingering corner, besides the script and performances, the cinematography, the sound design, are all superb.  There are no right or wrongs in Gyllenhaal’s “Lost Daughter” she doesn’t take the easy way out.  Gylllenhaal and her actors create an intricate, mesmerizing and unnerving film experience.  “The Lost Daughter” is a profound cinematic triumph.

“The Lost Daughter” will be released theatrically on  Dec 31st and streaming on Netflix as well.