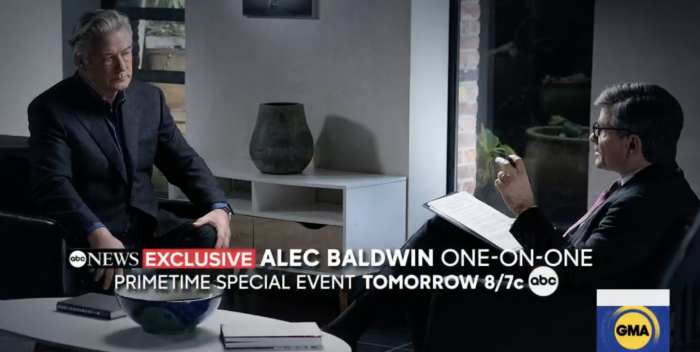 ABC finished third at 8pm behind “Annie” on NBC and “Young Sheldon” and “The United States of Al” on CBS.

George Stephanopolous managed to get no news out of Baldwin concerning the accidental on set death of Holyna Hutchins. Baldwin maintains he didn’t pull the trigger and wonders how a live bullet got in the gun that killed her.

Takeaway: this has been hard on Alec but he didn’t do anything wrong. The lawyer for the Assistant Director agrees. This is not a big surprise. All these people are terrified of civil lawsuits not to mention criminal negligence.

But only 4 million million people tuned in for this exercise in self-preservation. Interestingly, this came from not ABC News but George Stephanopolous Productions. GS is now making shows and licensing them to ABC News as part of his new deal. This was a non news event. Kind of a Hamptons sit down.