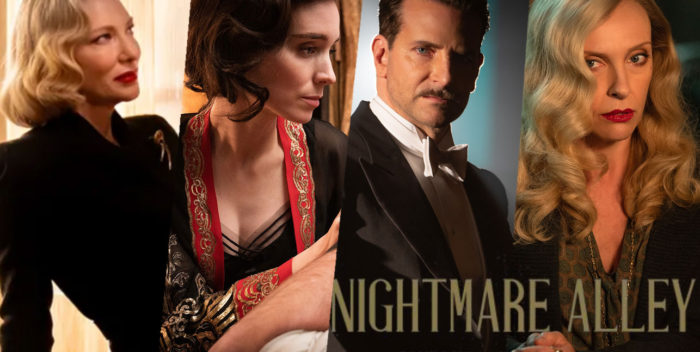 Guillermo del Toro is one of my favorite directors. So it’s doubly sad to report that his remake of the 1940s noir film, “Nightmare Alley,” begins as a dream and ends as a nightmare. It is not a potential Best Picture nominee. It’s a project with high hopes gone wrong, buckling under its own weight despite an all star cast.

del Toro’s work here can’t be faulted as far as direction and execution. From the outset “Nightmare Alley” is beautiful to look at it, with a sumptuous production design that goes from gritty 1930s carney life to spot on Art Deco glamour. del Toro knows how to conjure images, and does so with his usual brio.

But there is no screenplay here that makes sense for 2021. Whether it’s adapted or reimagined, the script is ill conceived, a disaster that squanders all of the good faith it tries to cultivate in the first half hour, tossing reason and empathy to the side. There is no one to root for. Every character is horrible. And none of them have  enough depth to even understand what makes them tick.

I know there will be del Toro fans who want to wish “Nightmare Alley” into some kind of lurid success. It won’t happen. And what this means is Searchlight, for the first time in years, is unlikely to have a Best Picture nominee this year. “The French Dispatch” isn’t happening, and neither is “The Eyes of Tammy Faye.” Former Fox Searchlight chiefs Nancy Utley and Steve Giulia can have some consolation in knowing their long, successful run is over.

“Nightmare Alley” opens at a carnival with really strongly drawn colorful characters and a magnificent set. Bradley Cooper, looking like Indiana Jones, turns up looking for work and quickly ingratiates himself with Toni Colette as Zeena, a fake psychic, and her husband, played by David Straithairn. He hooks up with Rooney Mara’s sorceress, and there are others at the carney we’d like to spend more time with like Willem Dafoe.

But that is not to be. Rather than stay at the carnival, Cooper and Mara leave for greener pastures. They come in contact with Cate Blanchett, a shrink who has a plan to bilk her rich patients. While Blanchett is just fine, the premise of the film now turns into something fairly sinister and unforgiving. There’s nowhere to go but down as Cooper’s Stan reveals himself to be nothing but a louse. He’s no hero, we have no idea who he really is or why he’s so awful. Even Cooper’s charms can’t keep us from disliking Stan more and more.

Meanwhile, the carney folks– Colette, Straithairn, Dafoe– who we invested in emotionally are gone. The filmmakers seem to be saying, You liked them? So what? Now Stan is involved in a grotesque plot with Blanchett’s Dr. Ritter, which puts Mara’s Molly– the only possibly likeable character — at a disadvantage. There is nothing for her to win here since the Stan we’re seeing is so reprehensible. Blanchett is too good at her job. She is convincingly evil.

The production design is top notch, everything from sets to costumes to lighting. Nathan Johnson’s score is gorgeous. But why does it rain continually from scene to scene, and then snow? “Nightmare Alley” is a movie about weather, or not. Capable actors like Clifton Collins Jr. are squandered. Richard Jenkins, a two time Oscar nominee, is made to look ridiculous wearing a crazy wig.

I suppose there are Easter eggs here. At the beginning of the film Stan is seen walking away from a burning farmhouse that seems to recall “Days of Heaven.” Later, there’s a carnival called the “Ambersons” which may be a reference to the more Magnificent family of that name. Maybe there are others but they don’t help. There’s that sinking feeling as “Nightmare Alley” crawls along at a bloated 2 hours, 2o minutes that this is the big disappointment of the season.

A Q&A at Alice Tully Hall followed, with Mara unable to answer most questions, and Cooper also seeming uncertain. The screenwriter, Kim Morgan, has no real credits before this and has married del Toro recently. The most interesting part of the panel chat was learning the movie started before the pandemic, went on hiatus, returned later. Mara was pregnant when they began, and had given birth by the time shooting resumed. I think she got the most of this experience.