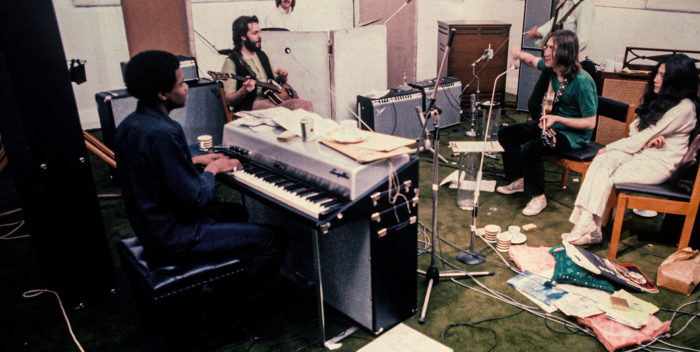 Part 2 is three hours long. It’s as extraordinary as Part 1, but it should have been broken into two parts.

The first half of Part 2 starts with the group broken down for a moment that will have historians running to their notes. George has walked out of the “Get Back” sessions, the others are trying to persuade him to return. Recording of Michael Lindsay-Hogg’s documentary moves from Twickenham Studios to Apple Studios in London.

George is finally brought around, but there is an audio recording of a private meeting between John and Paul. Lindsay-Hogg hid a microphone in the room and got the whole thing, it’s here for the first time. The two friends clear the air but not before John expresses his deep unhappiness with Paul for running roughshod over everyone. Up til now, John has been very quiet and removed from the drama between Paul and George. But he melts down, which seems to be cathartic.

Through this three hour segment you will wonder why Yoko is attached to John physically, never leaves, contributes nothing and seems like a living black cloud. The film does nothing to improve her historical perspective. You want to say to her, Get out of there now. What’s completely fascinating is that no one seems to care. They ignore her. They literally pretend she’s invisible.

Paul is more sanguine about Yoko than anyone else. With George MIA and John and Yoko off doing an interview, Paul says on camera with others around that he understands they love each other and want to be together all the time. He won’t take that away from them. He also won’t let it interfere with the recording. He’s far more reasonable about Yoko than I would have guessed, very diplomatic and sensible.

The Beatles finally regroup at Apple. But the arrival of Billy Preston, at George’s behest, turns everything around. At the exact midpoint of Part 2 comes Billy whom the guys knew as Little Richard’s keyboard player from 8 years earlier in Hamburg. Billy is the magic ingredient they’ve been missing. John calls him the Fifth Beatle and asks him to join the group. George is beaming with excitement. In Billy’s presence Paul is more tempered in his imperiousness. Now John and George are actually happy.

None of this to take anything away from Paul. You actually feel that he sees everything before it happens, and has somehow time traveled to the future, listened to both “Abbey Road” and “Let it Be,” and is trying to explain them to the others. He is supremely confident, and focused. He is in some “zone” of creativity that cannot be explained. It’s at once annoying and genius.

The rest of Part 2 is about the construction of the songs. “Get Back” comes together methodically thanks to Billy, and George realizes it owes its propulsive nature to the Four Tops’ “Reach Out I’ll Be There.” John sees bits of “Obla Di Obla Da” in “Two of Us.” There is now a lot of joking around, and an ease as the men start to see the fruits of their labor. When Lennon is happy, we’re happy.

An interesting aside: there is a group recollection of going to India. John and Paul in retrospect have a much less fond feeling for the Maharishi. George remains silent but doesn’t look so happy as John and Paul take the guru apart. The conversation puts a whole new spin on that part of Beatles history.

We do hear John over Parts 1 and 2 trying to figure out the song that becomes “Jealous Guy.” Paul is working on “Teddy Boy.” George has “All Things Must Pass” and surely more songs that he’s not aware of or sharing. His moment of genius is still a ways off although the making of “For You Blue” and “I Me Mine” each are tributes to him here.

Part 2 of what Jackson has done is exhausting and exhilarating. Like Part 1, it’s history in the making. For Beatle fans, this is it, the Holy Grail, a monumental achievement. We’ll watch it all again on Disney Plus and then treasure the DVDs. And it’s very important to have the “Get Back” book with dialogue from the original “Let it Be.” Plus, throughout you will see the heavy involvement of engineer Glyn Johns, whose contribution is essential. His version of “Let it Be,” included in the new Super Deluxe box set, is they key to everything.

PS Thought parts 1 and 2 there are about 2 dozen unfinished and previously unheard songs. Maybe bootleg collectors etc know them. But for the average person they are all revelations and need their own audio/video disc.