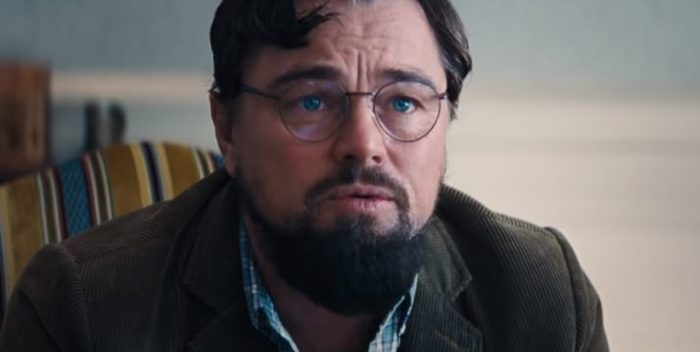 We’re still a ways off from getting into the nitty gritty of Adam McKay’s “Don’t Look Up.”

But while we wait, ponder this: Leonardo DiCaprio is now old enough to play the father of adult children. Believe it or not, and I can’t, Leo is now 47 years old.

It was 1993 when he broke through with the combination of “What’s Eating Gilbert Grape?” and “This Boy’s Life.” I have a clear memory of interviewing Leo over lunch in 1993. I was 12, which means he was a baby.

Over the years, DiCaprio has played a lot of roles, but never an onscreen Dad, not even to small children. He won an Oscar for tousling with a bear. Maybe he had kids in “Wolf of Wall Street,” but his character was too high on Quaaludes to know who they were. In “Catch Me If You Can,” he was a son of Christopher Walken. In Scorsese films, he’s had a lot of  things to do, but nothing involved progeny.

And yet, as a respected astronomer and scientist in “Don’t Look Up,” Leo’s got two sons at home. The actors who play them are 25 years old. His character is also married to an age appropriate woman played Melanie Lynskey. Indeed, in “Don’t Look Up,” DiCaprio — who used to be The Kid — is sort of avuncular toward Timothee Chalamet. Think of this: Leo used to be Timothee Chalamet.

And so it goes, right? The circle of life.

PS It kind of makes sense if you think about it. DiCaprio’s most famous role was as Jack in “Titanic.” His love interest was Kate Winslet. In “Mare of Easttown,” Kate had a grandchild! Really, now I’m taking a nap!