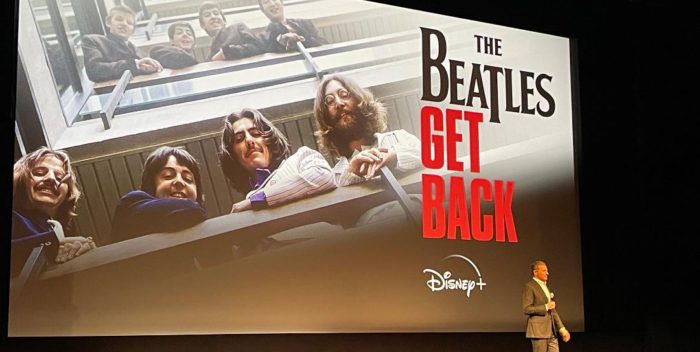 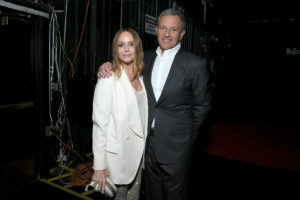 Great notices came in late tonight from LA for the premiere of Peter Jackson’s “Get Back” documentary about the Beatles.

Disney Plus screened 100 minutes at El Capitan Theater in Hollywood for a wildly enthusiastic crowd. Stella McCartney represented Paul, Julian and Sean Lennon repped for John Lennon and Yoko Ono. Ringo Starr stayed away reportedly because of fears of COVID (no one blames him).

Disney chief Bob Iger introduced the film. Peter Jackson, via Zoom, explained the process of how he put it together.

Sources say Stella, Julian and Sean all sat together and loved the film, as did everyone else, including Peter Asher, who once ran the Beatles’ Apple Records and whose sister, Jane Asher, was Paul’s girlfriend in the 60s. As part of Peter and Gordon, Asher had a massive hit with Paul’s song, “A World Without Love.” 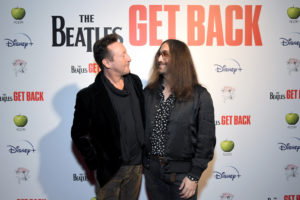 All six hours of “Get Back” begins running on Thanksgiving Day. Jackson took all the footage Michael Lindsay-Hogg didn’t use to make the “Let it Be” movie in 1970 and fashioned a film that shows all four Beatles getting along famously (with some short glitches) as they create this landmark recording.

More to come, but by all accounts “Get Back” is a monumental achievement. (I wish they’d show us the 100 minutes in New York.

Julian Lennon told me it was “great, all consuming, I loved.  It wouldn’t have happened but for  Peter Jacksons amazing technology.”

Scott Mantz Entertainment Journalist KTLA and self-described ‘Beatle-maniac’ gave us insight.  “Countless wow moments, so intimate, such a joyous experience.  Exhilarating and  rousing, which was the exact opposite of the “Let It Be” movie which was so depressing. This is the movie that diehard and casual fans have been waiting for 51 years.  All the Beatles fans who watched “Let it Be” over these years, and said how depressing it was, this is proof that the sessions were very productive, and joyous.  The Beatles loved each other, were joking around,  making music  for the three weeks they were recording this album “Get Back”  they spent more time in the studio than they did when they recorded “The White Album” back in 1968, where they were in different studios recording it and not working together as a band.  In this they are working together as a band and here’s the proof! This is the reward that we’ve all been waiting for!”