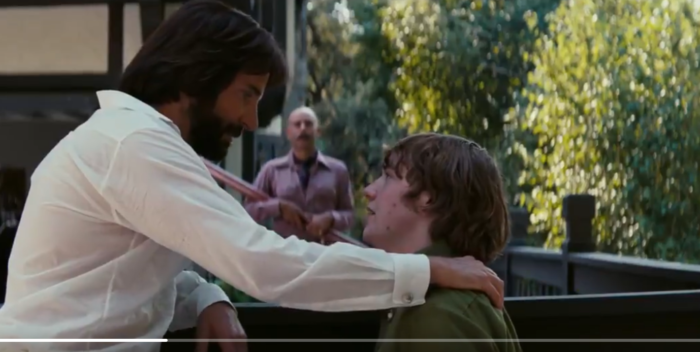 Paul Thomas Anderson is our Robert Altmanesque auteur, beloved for “Boogie Nights” and movies I’ve really enjoyed like “Magnolia,” “The Master” and “Phantom Thread.” For me, his creme de la creme is “There Will Be Blood,” which gets better on every viewing.

For “Licorice Pizza,” PTA, as he is known, gets sentimental for an era he didn’t live through, the early 70s. He was only born in 1970, but certainly has an affection for it that is palpable. He’s modeled “Licorice Pizza” on a good combo: “American Graffiti,” “Almost Famous,” and “Once Upon a Time in Hollywood.” You can’t do better.

His stars are an unlikely couple. Cooper Hoffman, son of the late Philip Seymour Hoffman, a PTA regular, is outstanding as 16 year old precocious hustler and sometime child actor Gary. Alana Haim (pronounced Hay-yim) is the 25 year old girl (they were girls then) Gary has a crush on also named Alana. They each give the breakthrough performances of the year. Despite the age difference, Gary (who is modeled on real life Tom Hanks producer Gary Goetzman) and Alanna (from her sisters’ rock group), have an undeniable sweetness that cements quickly and carries the film through some rough waters later.

There is no actual reason the movie is called Licorice Pizza. The title comes from a record store chain in Southern California that existed in the 70s and early 80s. No one in the move refers to it or mentions it, there isn’t even a background shot of the storefront. PTA just liked the words.

But there are other stores, one for waterbeds, and a pinball arcade. They are 16 year old Gary’s businesses that he implausibly creates instead of going to school. How does he do it? Like a 45 year old used car salesman on the make, which is to Cooper Hoffman’s credit that he pulls it off. He’s like the kind of kid who sells elevator passes to high school freshman in a one level building. He’s a sweet talker, and all he really wants is Alana.

Haim is a marvel. It’s her first acting job, and she’s a pro. She’s everything PTA wanted out of Katherine Waterston in “Inherent Vice” but didn’t get. Haim reveals herself slowly as the star of this movie, proudly and without fuss. She reminded me of a number of Robert Altman’s “natural” finds, who just meld into the film. Think Shelley Duval, or Geraldine Chaplin. Every critics group will be lining up to do something for her.

PTA, like Quentin Tarantino before him, is nostalgic for this period in L.A. history as it revolved around Hollywood. So Gary and Alana get involved with some real or real-like people. Bradley Cooper plays hairstylist Jon Peters, boyfriend of Barbra Streisand and not yet a film producer. Cooper is over the top and fun. The whole episode is imagined by PTA but a not so ridiculous scenario as “Peters” awaits installation of a waterbed from Gary, Alana, and their Little Rascals game of helpers.

Alana is courted by an older actor named Jack Holden, inspired by William Holden, with a spoonful of Even Knievel, and played with some nice subtlety by Sean Penn. It’s another digression, but it gives Alana a chance to wander into the adult world away from Gary’s fantasy of adulthood. Are the two that different, PTA is saying? Holden brings with him into this fantasy a self-possessed action director of note called Rex Blau, who might be a stand in for Sams Peckinpah or Fuller. Whatever he is, he’s played by gravel voiced singer Tom Waits, who almost steals the movie during his sequence.

“Licorice Pizza” is long, of course, and often repetitive. There are lots of characters– a la Altman — who you need a scorecard for. There are some leaps to make, but if you’re invested in Gary and Alana you’ll make them just to see how this will all turn out. The film is not as coherently focused as “Once Upon a Time in Hollywood.” It’s more like lying down on a the waterbeds Gary sells: it leaks sometimes but it has unexpected thrills. One of those, PS, is a running gag of Harriet Sansom Harris as Gary’s agent. You could almost imagine her ordering a real licorice pizza.