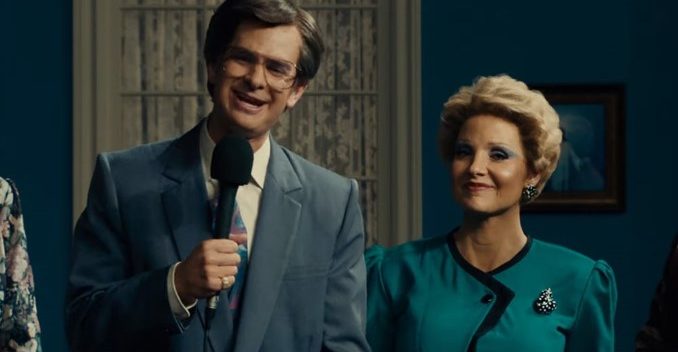 I just caught up with Michael Showalter’s “The Eyes of Tammy Faye,” a much maligned dramedy that was abandoned, I think, when rough winds whipped by early in its launch. Jessica Chastain worked like a dog promoting it, but it was dropped into the sea at the wrong time. I think if Searchlight had put it forth now, things would be different.

Chastain stars as Tammy Faye Bakker and produced the film, brought it to fruition. Andrew Garfield is Jim Bakker, and there are several excellent supporting players including Cherry Jones as Tammy’s mom and Vincent D’Onofrio as Jerry Falwell. Every bit of the production is top notch, from the over the top costumes to the lavish sets.

After the reviews and the poor box office, I expected something else. But “Eyes” was a lot better than I could have imagined. I read complaints that no one could tell if it was a parody or a docudrama. Apparently, there was supposed to be some kind of judgement made by the filmmaker that wasn’t communicated.

Let’s be honest. I never watched The PTL Network or Pat Robertson or The 700 Club in my life. I doubt any movie reviewers working now ever did. It was a joke, something you flipped by on the remote. When the Bakkers it the skids they became characters who were satirized, mostly on “Saturday Night Live.” That they were finally found out was no surprise. Swaggart, Falwell, most of them were tax evading hucksters with weird personal lives. Who has time for that?

Jim Bakker was one of them. Was Tammy? Showalter and Chastain make a lot out of her sympathies for AIDS patients and gay men. I don’t know if it’s true, but I’ll go along with it. It becomes Tammy Faye’s saving grace, because otherwise she’s vain and self-centered. She’s purposely clueless about Jim’s sex life and his financial misbehavior. She’s daffy, which is fine, although I think she was very ambitious, much like the character Lady Gaga plays in “House of Gucci.” It’s interesting that the two characters have emerged this Oscar season.

Don’t be fooled by Garfield. He’s very good as Jim Bakker. It’s not easy to be sleazy, but Garfield has got Bakker with a hook in his mouth. Why he isn’t being considered for Best Supporting Actor is beyond me. Sometime slyness escapes reviewers who are looking for trouble. I know this to be true. Give him another chance.

Jessica Chastain knocked me out. She could have been very campy and over the top. She is not. You can see that she found something in Tammy Faye’s heart to relate to. She’s got her physicality down, too. I love the way she stomps into a room. Was Tammy Faye also a hustler? Chastain is asking us to consider that she was full of grey areas, and in that space, the actress pulls off a little gem of a performance.

So is “The Eyes of Tammy Faye” a possible Best Picture nominee? Probably not, although this season I wouldn’t be judging so harshly. But I loved the acting. Cherry Jones gave the whole enterprise ballast. The movie deserves a calmer, more reasoned look by not just Academy voters, as well as the general audience.

Oh, PS: no one asked me to write this. I was never invited to a screening of this movie or received a press release about it. Subsequently it died at the box office. But I was curious, and I’m glad I was. Chastain should be in the crowd with Penelope Cruz, Kristen Stewart, Frances McDormand, and most definitely Jennifer Hudson. I’ve heard good things about Olivia Colman in “The Lost Daughter,” but I haven’t seen it. So far, Cruz stands out for me. (As for Gaga, we’re under court order to remain mum so far!)