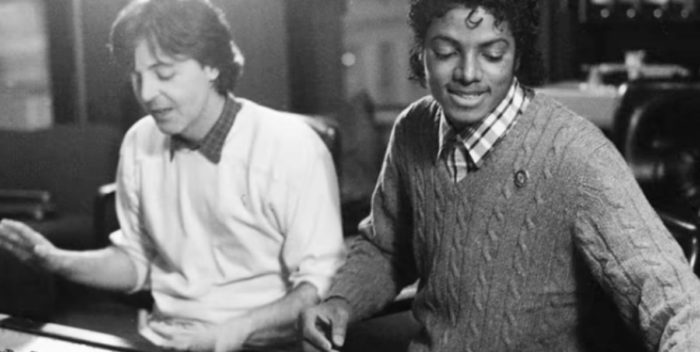 EXCLUSIVE Paul McCartney recorded three songs with Michael Jackson in the early 80s including “The Girl Is Mine,” “Say Say Say,” and “The Man.” The latter appeared on Paul’s “Pipes of Peace” album but gets short shrift even though I think it’s the best of the trio.

“Say Say Say” is the only one of the three documented in Paul’s “The Lyrics” two volume memoir of songs that will be published on Tuesday. Considering what happened after these sessions– Michael bought the Beatles catalog out from under McCartney — Paul is very generous to Michael in the recollection.

Initially Paul says he thought the high pitched voice on the other end of the phone was someone else. “I thought, This is a fan girl, and how the hell did she get my  number?” Quickly Paul realized it was Michael Jackson, who asked him, “Do you want to make some hits?”

Paul writes that Michael flew to London, and they met in his office. “We were both quite excited to work together, and the song came together quickly,” McCartney recalls in “The Lyrics.” He says: “I let him lead quite a bit, and I think a lot of the sensibility of the song was Michael’s. ‘Baptised in my tears’ — that’s a line I wouldn’t have used.”

McCartney says of writing, “It’s a time of discovery, and that’s what I love about it.”

There are two versions of “Say Say Say.” One was the hit, and the other was an outtake in which they reverse the singing parts. If you know the original, this other one is cooler.