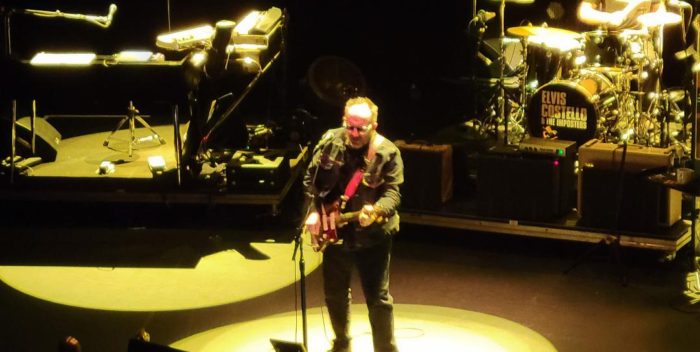 Elvis Costello and the Impostors dropped a new single this morning, “Magnificent Hurt,” and it’s really terrific. You will hear Steve Nieve’s organ featured prominently. Nieve missed Monday’s show at the Capitol Theater after receiving a false positive COVID test. He was back last night on the tour. I’m sorry I missed him.

“Magnificent Hurt” comes from a new album coming January 14, 2022 called “The Boy Named If.” Other songs from the album currently being road tested on tour include “Farewell OK” (which I did get to hear Monday night), plus “What If I Can’t Give You Anything but Love?” and “Mistook Me for a Friend.”

On the tracklist is a song called “My Most Beautiful Mistake” featuring Nicole Atkins. Of course, there’s a famous Costello song already called “Brilliant Mistake,” so we’ll see what that’s all about. Costello has almost never had a duet singer credited to any of his records, so who is Nicole Atkins? The 43 year old is not that well known although she’s had a lot of releases and praise. All of a udden she’s going to get a big boost from this recording. And we’ll learn all about her.

An interesting PS: Elvis has been on Concord Records for a while now. But with “The Boy Named If” he moves to Capitol Records at Universal Music Group. Capitol is a little more commercial than Concord, which suggests the album has some sales potential. From the tracks I’ve heard, I’d agree, although there’s nothing better than Costello’s Grammy winning “Look Now” album. Still in my car player!