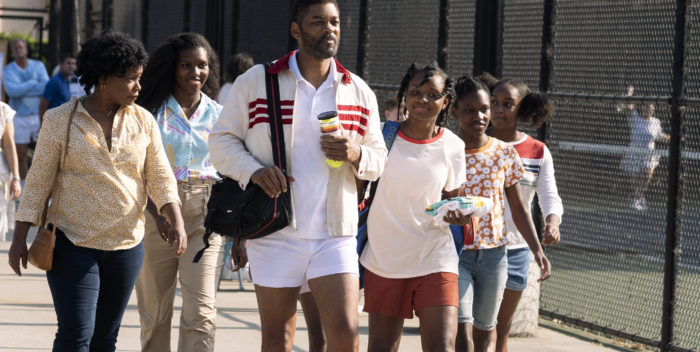 For months now I’ve been hearing how Will Smith ‘will win the Oscar’ for playing Richard Williams in “King Richard.”

Now that I’ve seen this two hour and twenty minute epic about the coaching father of Serena and Venus Williams, I will concede this much: Will will be nominated, no question.

If he wins the Oscar, Will will do it on the strength of his own enormous likeability. It won’t be for the character he plays in “King Richard.” Richard Williams is one of the most annoying main characters I’ve seen on screen in a long time. He is a royal pain, that’s for sure.

For about forty five minutes, director Reinaldo Marcus Green has “King Richard” in hand. He shows a determined father of five daughters trying to lift his family out of obscurity in Compton, Los Angeles by making two of them into tennis stars. Richard is single-minded, and has his own “plan” he intends to follow even as he courts, hires, insults, and fires famous coaches to help him. Luckily, he has a very understanding wife in Brandi, played by the wonderful Aunjanue Ellis. (She’s the key to this movie, and will get a Supporting Actress nod).

Those first forty five minutes are important. We see this very devoted nuclear family, charming and loose, authentically organized by Green. It’s the best part of the movie, the stuff before the fame and the irritating sports announcer narration booming over loudspeakers, and Richard telling everyone that he knows best. He’s a little like Allie Fox from “The Mosquito Coast.” You know he’s kinda nuts, kinda brilliant, and for a while, if you’re a kid, you’ll follow him.

Eventually, though, the family starts to question Richard’s authority, and we start to wonder what the point is here. His character arc doesn’t show growth, it just shows persistence and hard headed-ness. Did he create two superstar athletes? Sure. But what about all the experts he squandered and used along the way?

The most likeable people in the movie are Richard’s victims, like Tony Goldwyn as super coach Paul Cohen and Jon Bernthal as Rick Macci. Everything they say to Richard makes sense to us. Richard doesn’t listen. He just keeps talking. After a while you want to say, hey, Richard, will you shut up and take some advice these people?

I loved Will Smith in “The Pursuit of Happyness,” “Ali,” and a few other of his “serious” movies. In the former, he managed to make a determined man with a dream into someone you rooted for. He’s trying hard in “King Richard,” and almost makes it. That he doesn’t quite have a Grand Slam isn’t his fault, it’s the character. Richard is self-defeating.

So is this movie. Instead of having a “Rocky” type ending, we get something of a downer. That’s an interesting choice for screenwriter Zach Baylin and Greene. I was a little surprised by the direction they took. But there are lessons galore to be learned. “King Richard” is meant to be inspirational, and it is. I won’t deny it that power.

Greene is very good with the actors particularly the young women (Saniyya Sidney and Demi Singleton) who play the Williams sisters. There are cute moments with supporting players, like soap star Judith Chapman as Nancy Reagan. Goldwyn and Bernthal are incredibly winning. Ellis builds a stock loving wife into something deeper. She digs into Brandi and speaks for the exasperated audience a couple of times.

“King Richard” will debut in theaters and on HBO Max, where I think it will have a big audience. And watch for Will Smith and Aunjunue Ellis to be big players in awards season.