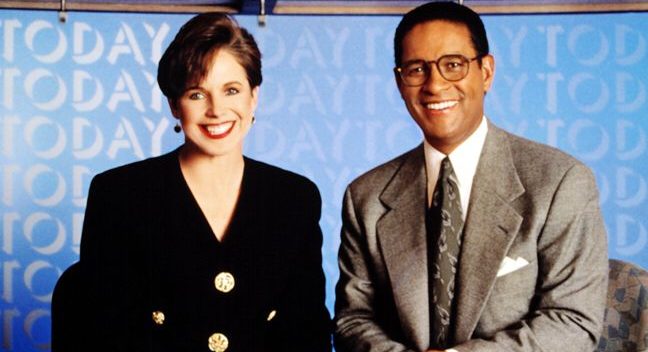 Katie Couric’s memoir, “Going There,” is out today. We’ve already read her thoughts about Matt Lauer, Deborah Norville, Martha Stewart, and Ashleigh Banfield, among others. Katie’s book could be called “Throwing Everyone Under the Bus.”

But what about Bryant Gumbel? According to Katie, Gumbel refused to be co-anchors with her. She writes:  Ultimately, Bryant would have it written into his contract that he was the anchor, I was the co-anchor, and he would open every show. It was also understood that only he could throw to Willard Scott. That seemed strangely territorial to me, but I could live with it. The bottom line: I was going to be a key part of this broadcast.”

Gumbel, she says, always gave her a hard time on the set although she respected his talent and work ethic. Katie observes:

“Bryant…loved to needle me, and I had no choice but to smile gamely and play along. The guys in the control room sometimes encouraged him by piping a whip-cracking sound effect into the studio.”

Ultimately, though, Katie survived her six years with Bryant until NBC News president Andy Lack intervened on her behalf.

“I was on the way up, and Bryant was on the way out. After 15 years anchoring TODAY, the last six with me, he was moving on. Andy Lack would later tell me he’d informed Bryant that he wanted us to be 50/ 50 partners. When Bryant balked at the idea, Andy showed him the door. Although maybe Bryant was ready to go anyway. And there was something else: his heir apparent sitting 15 feet away. Matt was nine years younger than Bryant and born for this job. Also helpful was the fact that Matt and Bryant had become close friends, sharing an obsession with golf and an easy, jokey, locker-room rapport; both thrived in the boys’ club atmosphere at NBC. Once, when Michelle Pfeiffer was coming on the show, they went on and on during the commercial break about how hot she was; Bryant even said, “I’d drink her bathwater.”

“When we were back on the air, I teased the segment with something like “Also coming up, Michelle Pfeiffer— Bryant, didn’t you say you’d drink her bathwater?” He was furious. I thought it was funny. Another time, TODAY’s wildlife wrangler Jim Fowler was waiting in the wings with a primate. Bryant, Matt, and I were chatting on the sofa when I innocently remarked that Jim was backstage “petting the monkey.” They both burst out laughing like a couple of 13-year-olds.